Home / News / Local News / Money Disagreement Leads To The Arrest Of The Killers Of Onwa, An APC Stalwart In Festac 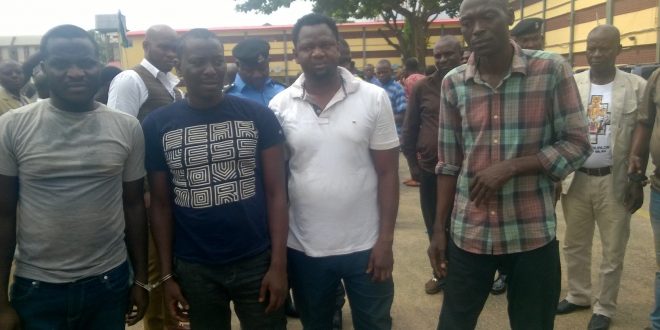 Money Disagreement Leads To The Arrest Of The Killers Of Onwa, An APC Stalwart In Festac

Four suspected killers of a stalwart of APC in Festac, Emmanuel Ubah alias Onwa, have been arrested by the operatives of the Inspector-General of Police’ (IGP) Intelligence Response Team (IRT)

Ubah, the head of Community Policing Youth Vanguard (CPYV) in Amuwo Odofin LGA was shot dead on the eve of council elections in July. He was shot four times on the head while inside his by assailants, who threw all his mobile phones into the canal.

According to TheNation, Onwa’s death sparked outrage in Amuwo Odofin, with his friends and associates insisting that it was politically motivated.

The suspects were said to have been contracted to kill Ubah but they denied the allegation, insisting that they murdered him because they felt threatened by his influence in the area.

It was gathered that the suspects, who fled to Cotonou after allegedly committing the offence, later had a disagreement on the balance of their payment.

They were said to have been embroiled in fights with Onifade, who was allegedly their link to the person who ordered the murder.