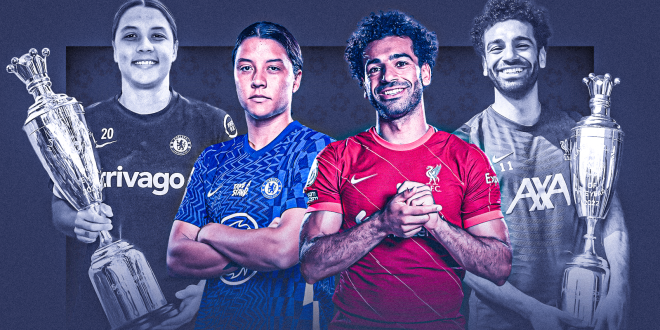 Mohamed Salah wins the PFA Player of the Year award for the second time with Chelsea’s Sam Kerr collecting the women’s award.

Mohamed Salah has been voted the Professional Footballers’ Association Men’s Players’ Player of the Year for the 2021/22 season, marking the second time the Liverpool talisman has won the award with Chelsea’s Sam Kerr collecting the women’s award.

The Egyptian forward, 29, has snatched the accolade back from Manchester City playmaker Kevin De Bruyne after a breathtaking campaign at the tip of Jurgen Klopp’s attack. He also fended off competition from Liverpool teammates Sadio Mane and Virgil van Dijk, Manchester United superstar Cristiano Ronaldo and Tottenham striker Harry Kane.

Salah scored 23 Premier League goals and contributed 13 assists as the Reds narrowly missed out on the league title to City. These hauls saw him win the top flight’s Golden Boot – which he shared with Spurs’ Son Heung-min – and Playmaker of the Season awards, while he also helped Liverpool win the FA Cup and EFL Cup during a memorable season on Merseyside.

Kerr scored 20 goals for Chelsea to be top scorer in the FA Women’s Super League, helping Emma Hayes’s team win the domestic double after beating Manchester City in the FA Cup final. “It’s a massive honour whenever you’re voted by your peers. I think that’s the highest honour as a player, so it’s an amazing feeling,” said Kerr, who was also named the FWA’s women’s footballer of the year.

Arsenal’s Dutch forward Vivianne Miedema and her Gunners teammate Kim Little were also on the PFA shortlist along with Manchester City’s Alex Greenwood and Hemp as well as Chelsea’s Pernille Harder.

Liverpool manager Klopp hailed Salah as he was presented with the award, insisting only veteran midfielder James Milner can rival him for being the earliest to training every day. The former Chelsea star added: “It’s a great honour to win a trophy, individual or collective and this one is big so, very happy and very proud of that.

“This one is a really good one to win, especially because it’s voted by players. It shows you that you’ve worked really hard and you get what you worked for. I have my room with trophies in a cabinet and I made sure that I had another space for one more. I always keep space and just try to imagine that the trophies are going to come.

“When you get older, you feel like you’re more stable and you know exactly what you want from football so I’m just trying to really chill and help the team.

“That’s why I think I also won the playmaker because it’s like you’re more aware of the game, so you just try to make the people next to you better and try to make yourself better as well.”