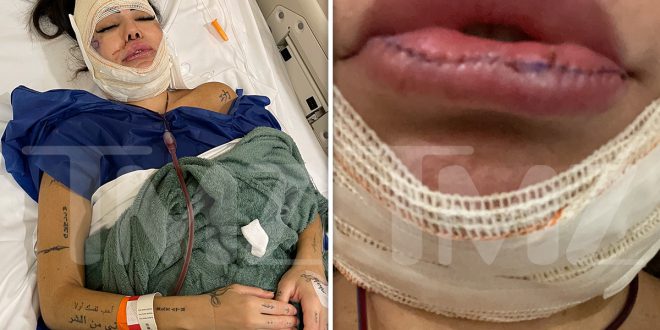 A model who sued Chris Brown was rushed into emergency surgery after botched fillers left her with swollen lips and blood poisoning.

Liziane Gutierrez’s 2019 Botox op was causing a painful flare-up and swelling around her face, leading doctors to believe she had a deadly blood infection, according to TMZ.

Gruesome footage of the surgery shows surgeons digging around what appears to be her cheeks to remove the toxic substance.

According to the entertainment news website, Liziane went for Botox and lip fillers in Brazil but later complained about swelling and that her face was ‘about to explode’.

She was later diagnosed with a bacterial skin infection.

The Brazilian beauty told US doctors that she may have been injected with silicone or another dangerous substance.

She spent £2,200 on the botched Botox op in 2019 and has since had to visit doctors multiple times. Her emergency surgery alone cost £7,300, according to TMZ.

Another popular anti-aging treatment is Dermal fillers. Like Botox, fillers are injectable and are typically used to plump up the lips or cheeks.

Some are temporary and used primarily for soft tissues in the face.

This is not the first time Liziane has undergone emergency life-saving surgery.

In 2018, the 35-year-old escaped death following a horror liposuction procedure.

She was placed in a coma by doctors in Istanbul, Turkey, after suffering a severe reaction to anaesthesia.

Her family claim the operation was unnecessary but the model, who lives in the United States, had been determined to have the operation despite their objections and secretly flew to Turkey against her doctor’s orders.

“Liziane is in Turkey, but not even the family knew that she had travelled there for aesthetic purposes,” said a family member, who didn’t wish to be named, told Quem magazine.

“She had some kind of reaction to the anaesthesia and to spare her, doctors put her in an induced coma.

“She had already expressed the intention to do liposuction, but since there was almost no fat, no doctor wanted to perform this surgery,” he added.