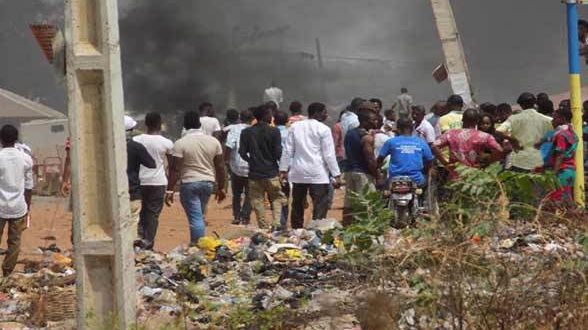 Nasarawa state Police command has arrested two persons in connections with a mob action that led to the death of a soldier, Lance Cpl. Ayuba Ali, on Monday in Akwanga, Nasarawa state.

The command’s spokesman, DSP Kennedy Idirisu, confirmed the arrest on Monday in Lafia.

Idirisu said that available information revealed the the victim, who was on pass from Maiduguri, allegedly hit a street hawker at Agwan Affi area of the town while riding on a motorbike.

According to him, the victim, who was in mufti, tried to pacify the hawker and an altercation ensued resulting in irate youth beating him to coma.

Idirisu said the soldier later died at the hospital, while investigation has begun.

He said efforts have been intesified to arrest all the perpetrators of the dastardly act.

Meanwhile, Mr. John Abimiku, an eye witness told NAN that the area has been deserted for fear of the unknown.

“As I speak with you now, about four military trucks are stationed in the area and soldiers are picking up any youth on sight,” Abimiku added.

He claimed that the two persons arrested by the police were amongst those who took the soldier to the hospital after the mob action.

Charles Igbinidu is a Public Relations practitioner in Lagos, Nigeria
@https://twitter.com/ionigeria
Previous Kachikwu dissociates himself from Governorship campaign posters
Next The Ooni Of Ife’s Marriage To Olori Wuraola Has Crashed After Just 17 Months,