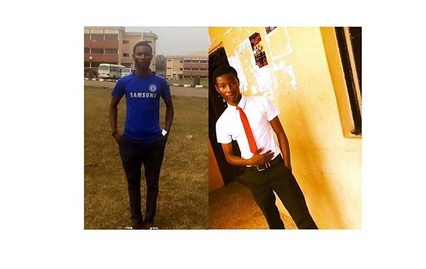 Yemi Olaniyan, said to be a final year student of Accounting at the Osun State University, Okuku campus, has been found, two weeks after being declared missing by his troubled parents.
The Osogbo, Osun State resident had allegedly travelled to Lagos for the first time on Tuesday, February 28, to submit some documents at the Institute of Chartered Accountants of Nigeria office in Yaba, for his industrial training.

He allegedly last spoke to a colleague, Oyin, around 7.30pm, telling her that he was stranded and would pass the night at the Ojodu Police Station, Lagos State.

But the Lagos State Police Command said the division had no record that he visited the station or was detained there. It has now been revealed that Olaniyan never ventured into Lagos.

He had all these while been gallivanting and junketing with his girlfriend in Osogbo. The pleasure loving kid is presently cooling his heels in a DSS custody in Osogbo.