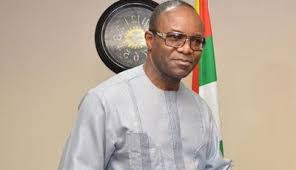 Dr. Ibe Kachikwu, Minister of State for Petroleum Resources on Tuesday narrated how an alleged militant called him by telephone to inform him that he was going to blow some pipelines.

The Minister made the revelation while speaking at the federal government town hall meeting which took place in Kaduna.

“Last week, my phone number was published in Sahara Reporters and then I began to get millions of phone calls.”

“One of the first phone calls I took not knowing who was calling me was from a militant somewhere and when I picked up the phone, he said, ‘Are you the minister of petroleum’, I said yes.

“He said I dey go blow pipeline tomorrow, and I said why would you do that my brother if you love Nigerians? He said ‘are you sure you are the minister’, I said yes.

“Then he said for being so humble, I will drop the plan. That’s the kind of environment under which we operate.”

While also pleading with Nigerians to be patient with the administration of President Muhammadu Buhari, Kachikwu said, “The reality of our situation is that wherever I turn when I was appointed, I had problems. If I turn to the refineries when I joined in October, they were not working. If I turned to the pipelines, they were non-existent.

“But I wasn’t discouraged, because if I had problems, what will I say of a man who at his age took over the mantle of this country? His Excellency, the president so that gave me a lot of encouragement,” he concluded.