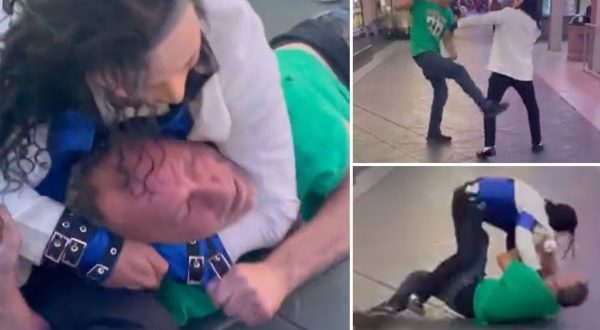 A Michael Jackson impersonator wrestled a man to the ground after he was the victim of an unprovoked attack.

The attack on the Las Vegas strip came out of the blue and was completely unprovoked.

But ‘Jacko’ threw his attacker to the ground after being kicked.

The pair were seen grappling on the ground, but Jackson was able to control his attacker who was put in a headlock after his hair was pulled.

They separated after the filmed brawl which broke out on Freemont Street, which is known for its gambling in the US city.

The short film quickly gathered fans and notched-up more than 1.6million views since it was posted

Jackson’s attacker clearly regretted starting the brawl and shuts his eyes before onlookers are heard saying: “He’s out.”

Someone in the crowd called out for help while others broke up the fight.

The Michael Jackson impersonator gets his attacker in a headlock ( Image: @DeeganMarcus/Twitter)

The pair grappled on the floor and Santana Jackson had the upper hand ( Image: @DeeganMarcus/Twitter)

But the loser had not learned his lesson and again got into a fighting position and showed he was ready for a second round with Jacko impersonator.

The video recorded more than 2.1 million views and was retweeted thousands of times.

People who watched the flick were quick to crack Michael Jackson-related jokes about the brawl and, overall, backed the impersonator.

The brawl attracted a number of onlookers ( Image: @DeeganMarcus/Twitter)

One poster wrote: “Oh lord that smooth criminal just took down that streetwalker to get on the floor, rocked his world and left blood all over the dance floor.”

Another user noticed the attacker’s T-shirt carried the words ‘can’t fix stupid’ and added: “No, you cannot…”

A screenshot of the man who lost the fight was shared in another post with a caption which read: “This is the most ‘what have I done’ moment I’ve ever seen on this app.”

The impersonator defended his actions and said he was “not trying to hurt this guy just trying to restrain him from swinging at me.”

“Please know I don’t think fighting is the answer so try to avoid a fight if u can. Stay safe,” he added.

The performer is a member of the MJ Live Show, a Las Vegas-based tribute concert to pop star.