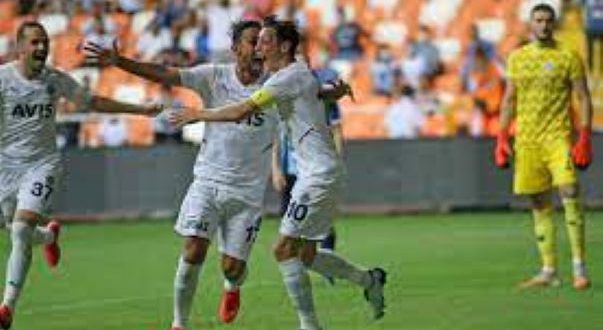 Mesut Ozil scored his first goal in 18 months on Sunday and celebrated passionately after breaking his duck.

The much-maligned former Arsenal winger got off the mark for the Turkish club against Adana Demirspor on Sunday.

The 2014 World Cup winner struck just 11 seconds into the second half after tapping home a cross from close-range.

That proved to be the only goal of the game as he sealed the points for Fenerbahce and he was mobbed by his teammates afterwards – and the usually muted ace even struggled to keep the grin off his face.

The last time the attacker hit the target was way back in February 2020 for Arsenal.

He struck against Newcastle in a 4-0 home Premier League win.

That proved to be the only goal he managed that term and his last for the Gunners before leaving 11 months later.

Ozil joined Fenerbahce back in January on a free transfer following a miserable end to his stint at the Gunners.

Mikel Arteta froze the ex-Real Madrid ace out of the first-team squad as the attacker also got involved in a PR war with Arsenal by offering to pay the wages of Gunnersaurus after the legendary Arsenal mascot was allegedly made redundant.

Ozil then failed to get off to an impressive start at Fenerbahce after securing his exit.

He made 11 appearances for them in the second half of last season and provided just one assist in that period.

He was also sidelined for nearly two months due to an ankle injury he picked up in a draw against Antalyaspor.