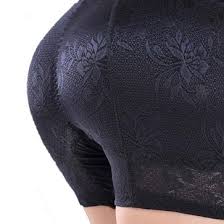 Some men in the Federal Capital Territory (FCT) on Thursday expressed divergent views about the use of body enhancers such as padded braziers, hips and bum boosters by women.

While some described the trend as deceptive, others stated that it makes them women more attrative.

It would be recalled that one of the reasons given by a celebrity former football, John Fashanu for divorcing his former wife, Abigail Igwe,  is that, she has a flat bum but spends money to make it look bigger.

According to Fashanu, “If any woman can spend N200,000 to make her bum look bigger, then she has a challenge. When we got home, I saw a flat bum. That was not what I was expecting. People should know she has flat bum bum”.

In their reactions to the use of enhancers by some women, the men said the body enhancers give a wrong impression about the reality of the user’s physique.

Body enhancers are undergarments such as padded braziers, butt’s booster, hip enhancer, waist clincher and others worn by women.

Some of the men who said they found the trend repulsive and unappealing.

Others, however, said the use of body enhancers, particularly padded braziers, added more to a woman’s sexual appeal, makes her more attractive and added to her confidence.

Mr Timothy Danladi, condemned the use of body enhancers by women which, he described as artificial and falsehood.

“I find the use of artificial buttocks by some women to add more to their God’s given physique unattractive.

“This is because it gives a wrong impression about their stature that will definitely be revealed to their partners when they get married,’’ he said.

Mr Emmanuel Alabi said such was based on falsehood and could cause problems in the home since a man was usually attracted to a woman because of her body apart from her intellect, manner and facial beauty.

“If a woman uses artificial things to entice a man into marrying her, nemesis will catch up with her because when he later finds out that those things were fake, it could even lead to break-up of the union.’’

Alabi said there was the need for women to be natural to avoid deceiving men and causing problems in their relationships.

Similarly, Mr Shuaibu Sabo said that such enhancers only created an illusion that was totally different from reality.

Sabo advised women to desist from using such unnatural endowment and appreciate the body God gave to them.

“Some women are also not satisfied with what God has given them.

“They go to any length to change their natural identity which is more attractive such as bleached skin and use of body enhancers,’’ he said.

On the contrary, Mr Sani Isuwa, said he found the use of body enhancers attractive, especially for women whose body were not proportionate to other parts.

Isuwa said he did not have any problem or reservation about a woman that uses enhancers which is better than undergoing a surgery as it is predominantly practiced in other countries.

“I prefer a woman to use body enhancers than for her to undergo surgery to add more or distort what God has given her.’’

Mr Boniface Eze, said he encouraged his wife to us body enhancers due to the change in her body after numerous child delivery.

“Some women actually need body enhancers to make them more appealing and attractive to the opposite sex,’’ he said.

According to him, he encourages his wife to use padded bra because nursing five children has changed the shape and size of her breast.

“I prefer my wife to use padded bra because they are no longer the way they used to be after breastfeeding five children.

“When she wears clothes it fits her more than if she uses normal brazier,’’ Eze said said.

Meanwhile, some of the women that use body enhancers told NAN that it boosted their confidence, added more to their sexuality and made clothes more fitting on their bodies.

Mrs Jecinta Eze, a mother of five, said she could not go out without wearing a padded bra.

“If I don’t use a padded bra, I will look so unattractive and flat-chested,’’ she told NAN.

Also, Miss Grace Iliya, said she uses hip booster to make the lower part of her body proportionate to her upper part.

“If I don’t use a hip booster, my upper body looks bigger than my lower body because I am busty.

“So, I prefer to use it to make both parts proportionate and it boosts my confidence and makes me look more attractive,’’ she said.

Meanwhile, Malam Usman Ali, an undergarment trader in Garki Market, said he usually sold more padded bras than any of his wares.