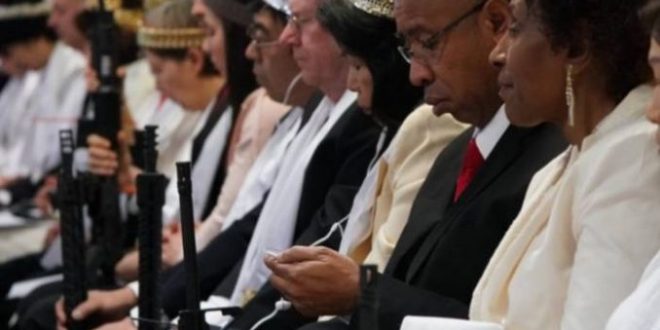 Crown-wearing worshippers of World Peace and Unification Sanctuary in Pennsylvania, United States, scared the hell out of people and a school on Wednesday, when they arrived the church, each clutching an AR-15 rifle.

Brides were clad in white and grooms in dark suits, all arriving with dozens of AR-15s, though unloaded.

Though the state police kept watch as the ceremony unfolded, neighbours were not at ease.

A smattering of protesters stood outside the church and a nearby school cancelled classes, the AP reported.

An attendant checked each weapon at the door to make sure it was unloaded and secured with a zip tie, and the elaborate commitment ceremony went off without a hitch. Some worshippers wore crowns made out of bullets.

Tim Elder, Unification Sanctuary’s director of world missions, said the ceremony was meant to be a blessing of couples, not “inanimate objects,” calling the AR-15 a “religious accouterment.”

But Wednesday’s event, coming on the heels of the high school massacre in Parkland, Florida, which killed 17, rubbed emotions raw.