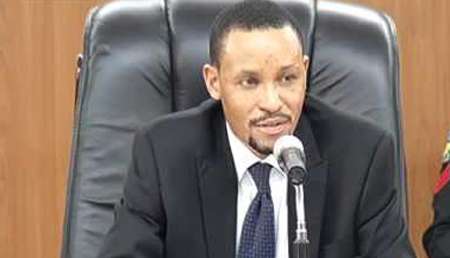 A melodrama occurred at the Code of Conduct Tribunal (CCT) following an allegation by Mr Raphael Oluyele, a defence counsel against the tribunal Chairman, Mr Danladi Umar.

Oluyede, who filed a motion challenging the competence of Umar to try the case had alleged that the defence would not get justice under Umar’s chairmanship of the body.

He said: “due to the cloudy nature of the relationship between the CCT chairman and the EFCC the defence is afraid that they cannot get justice from the chairman.’’

The statement angered Umar and he ordered the arrest Oluyele’s.

But the situation was controlled following intervention by senior members of the Bar.

Oluyede’s motion to scuttle the trial of Senate President Bukola Saraki, at the tribunal was refused because of the objection raised by the prosecuting counsel, Rotimi Jacobs (SAN).

Jacobs had argued that Oluyele’s application was not ripe for hearing, stressing that the business of the tribunal for Thursday was to continue the cross examination of prosecution witness.

He argued that the counsel, who filed the motion, was not the lead counsel in the matter.

According to him, every application made by the defence must come through the lead counsel as required by Section 349 (7)(8) of the Administration of Criminal Justice Act 2015.

Jacobs submitted that Agabi, the lead counsel to Saraki, informed him that he was not aware of the motion seeking the CCT to disqualify itself from the trial over allegations bias.

He further argued that the law requires that if any lawyer wanted to file any motion, such must come though a lead counsel.

According to him, in this case, Agabi is not aware of the motion.

However, when Oluyede wanted to move the motion, he was cut short by the tribunal Chairman, Mr Danladi Umar, who upheld the submission of prosecuting counsel.

Umar said that the trial was slated for continuation of cross examination of prosecution and that the tribunal would not entertain any application to stop the trial from “a busy body lawyer’’.

He, therefore, directed prosecution to produce his witness for cross examination.

Oluyede had filed a motion on April 20, asking the tribunal to disqualify itself from trial of Saraki.

He insisted that Saraki could not get justice under his chairmanship.

Charles Igbinidu is a Public Relations practitioner in Lagos, Nigeria
@https://twitter.com/ionigeria
Previous Judge nullifies baby’s name, ask family to give her another name
Next Amnesty Programme for Niger-Delta Militants to end by 2018 – Lakemfa