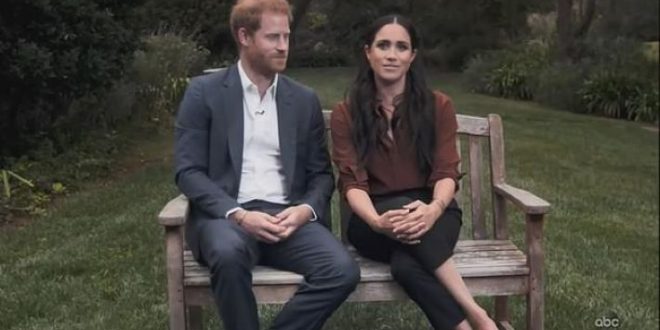 Charles Igbinidu May 26, 2021 Life and Style Leave a comment

Meghan Markle reportedly introduced Prince Harry to “ancestral healing” which he claimed will help him “break the cycle of genetic pain”.

Ancestral healing appeals to be the same as ‘deliverance’, a religious practice by some Pentecostal Christians in Nigeria during which victims are allegedly freed from ‘spiritual bondage’

Prince Harry told Dax Shepard on his podcast ‘Armchair Expert’ recently that Prince Charles had ‘suffered’ because of his upbringing and that the Prince of Wales had then ‘treated me the way he was treated’, calling it ‘genetic pain.’

A source close to Meghan told DailyMail.com: “Meghan is the one who introduced Harry to the term ancestral healing.

“She said she learned about generational trauma from her mum who started taking her to weekly services at Agapé International and credits its founder Michael Beckwith for teaching her about spirituality.

The source went on to say that Meghan is a big advocate of tapping therapy and does reiki on herself, Archie, and her dogs. Harry told the podcast: ‘I can take Archie on the back of my bicycle, I would never have had the chance to do that’

“‘Meghan said both she and Harry come from a long lineage of pain and suffering, generations of genetic baggage and that it’s now up to them to break the cycle once and for all.”

The source said: “[Meghan] is convinced that tapping has helped both her and Harry release negative patterns imprinted on their DNA from past generations – generations going all the way back to even the darkest of times including slavery, war, you name it.” 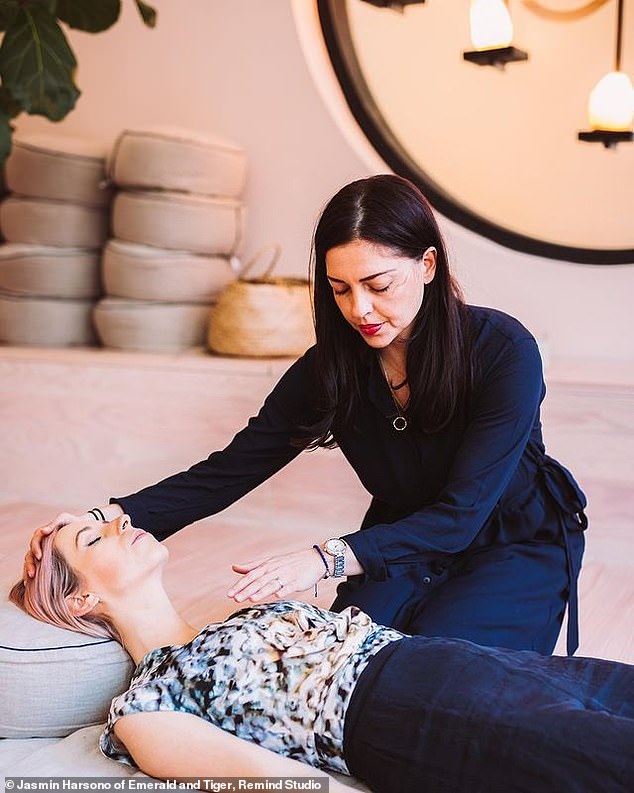 Reiki is a Japanese form of alternative medicine called energy healing based on the principle that the therapist can channel energy into the patient by means of touch, to activate the natural healing processes of the patient’s body and restore physical and emotional well-being. Pictured is author of Self Reiki, Jasmin Harsono of Emerald and Tiger, Remind Studio

Reiki involves therapists ‘channeling’ energy into their patients by touching them.

The source said: “Meghan also does Reiki on herself, and even on Archie and her dogs to help them feel more balances and relaxed.”

Harry had hailed his mum Diana’s “immense impact” on his upbringing but said he didn’t cope with her death until Meghan suggested therapy.

In a sweary podcast chat, he described royal life as a mixture of The Truman Show film and being in a zoo.

The royal also revealed he wanted to quit royal duty when he was in his twenties, saying: “I didn’t want this job.”

He told how he hated his role after the death of his mother Princess Diana and always felt different from the rest of his family.

And he said he moved to the US with Meghan and baby son Archie to escape his “genetic pain”.

The Duke opened up about his mental health struggles in a brutally frank, and profanity-laden, chat with US podcast host Dax Shepard.

He also claimed that he was told “you need help” while he was ­growing up but rejected it, saying: “There is nothing wrong with me.”

Only weeks after telling Oprah Winfrey in a bombshell interview that his dad was “trapped”, Harry again opened up about their father-son relationship.

He said on the “Armchair Expert” podcast: “I verbalise it, which is, ‘Isn’t life about breaking the cycle’?

“There’s no blame, I don’t think we should be pointing the finger or blaming anybody.

“But certainly when it comes to parenting, if I have experienced some form of pain or suffering because of the pain or suffering perhaps my father or my parents suffered, I’m gonna make sure that I break that cycle so that I don’t pass it on, basically.

“There is a lot of genetic pain and suffering that gets passed on ­anyway. As parents we should be doing the most that we can to say, ‘You know what, that happened to me, I’m gonna make sure that’s not going to happen to you’.”
Share