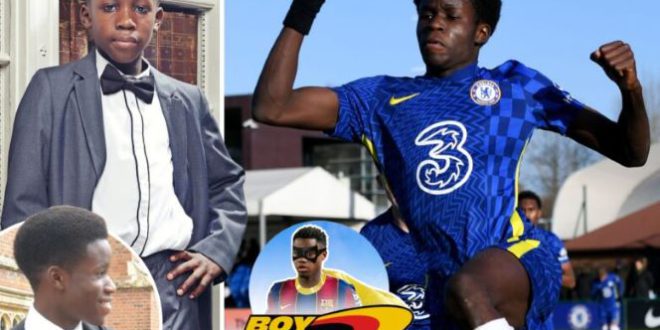 Meet Tudor Mendel-Idowu, who surely must be the UK’s brightest footballer.

The Chelsea academy prospect, 17, is blossoming in the U18s this season – with five goals and three assists in nine games.

However, if he doesn’t make the grade as a player – he can count on his education.

Mendel-Idowu is a star pupil at the prestigious Eton College, where Prince William and Harry attended.

Better still, he’s a King’s Scholar – meaning he’s one of the most academically gifted boys in the country.

As early as age eight, Mendel-Idowu was juggling academia with playing football.

He took part in the Child Genius of the Year in 2014, alongside his 11-year-old sister Hazelle, which featured on Channel 4.

The competition was overseen by Mensa, and featured 20 highly-gifted youngsters between the ages of seven to 12, who face two gruelling rounds: Logic and Reasoning and Memory Recall – where they have just one hour to commit 104 randomly shuffled playing cards to memory.

While his sister was eliminated in the second round, brainy Tudor finished second overall.

At the same time, he discovered a flair for the beautiful game as various clubs declared their interest.

“It would have been around the age of seven or eight that I realised I had a special talent. About the same time, I saw my academic gift coming to fruition as well.

“There were different top academies across the UK that approached me. Chelsea were the ones who showed the most interest and essentially being the top academy, they really wanted to get me, and did in the end.”

Runs in the family

Intelligence and being a brilliant footballer (he’s been capped by England at U15 and U17 level) is in Mendel-Idowu’s blood.

His grandfather on his mother’s side played internationally for his country, Nigeria.

While on his father’s side, his other grandad Dr Fola Kayode Mendel-Idowu was a gifted academic who specialised in bio-aeronautics.

He would make history as Africa’s first flying doctor.

“My parents have always said I am a sort of fusion of these two extraordinary individuals,” he recently told FIFA.com.

Astonishingly, Tudor is a King’s Scholar at Eton.

“King’s Scholars are the top fourteen brightest students in the UK, if not the world, admitted once per year at the age of 13,” he explained.

“It’s decided after a rigorous examination process over two weeks, covering papers in a variety of subjects: Maths, Latin and Divinity to name a few.”

He said: “Students who study these subjects have a wide range of options. I’m looking at Classics courses which opens other pathways like Philosophy, Law, Literature and Archaeology.

“Foreign policy and international relations have always interested me too. I can really go in any of these directions.”

But he won’t neglect his football, which he still holds a massive ambition in.

“I want to be competing at the highest level. I have the same expectations for myself in football as I have as an academic,” Tudor revealed.

“I want to be at the top. Playing in, and winning Champions Leagues. Playing at a World Cup. Maybe even a World Player of the Year Award – we’ll see!”