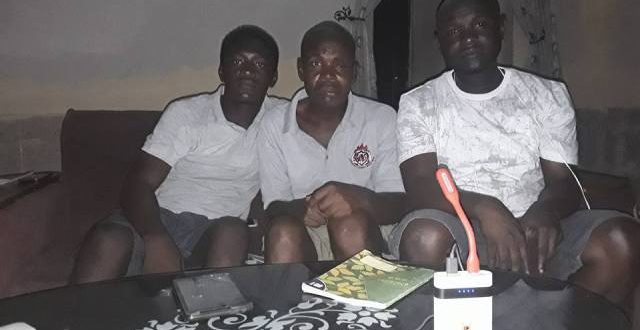 A 52-year old Benue indigene from Buruku local government, Pastor Simon Abe Mashika has been living with a bullet in his skull for 14 years now.

According to philanthropist Ukan Kurugh, the man was caught in the middle of a crossfire between the Police and armed Robbers during a Robbery incidence on Katsina Ala street on the 7th day of June 2004.

Pastor Simon, was a staff of NEPA and on that faithful day, he had closed from church when he got a call that there was a fault at a transformer somewhere at Katsina Ala street, he and a friend/colleague, Mr. T, went to check it out. They had finished fixing the fault and were on their way home when they ran into these robbers.

The police were alerted and they responded. In the course of the exchange of fire which ensued afterwards, Pastor Simon got hit by one of the bullets. The bullet went through his left ear and went right into his brain.

He was taken to Madonna hospital where he was referred to Memfys Hospital for Neurosurgery in Enugu. He went there and it was conferred by a CT scan that the bullet was resting in his skull. He was told a surgery at that time was a grave risk to his life and also the hospital was not sufficiently equipped to have one at that time successfully.

He was placed on medications which cost at least N5000 a week, and was asked to return to the hospital to be checked regularly.

“His wife told me they couldn’t continue with both due to lack of funds. Since he was no longer working at the time, it was difficult to keep up with it so they stopped at some point.

He had lived with the bullet in his Skull for 14 good years now. He suffered partial deafness and his speech is impaired since then and can only communicate by gestures and writing on a paper now using his left hand to learn since the incidence, since his right side is paralyzed all because of the bullet”.

According to reports, Pastor Simon needs another CT Scan to ascertain the position of the bullet and then the surgery to make him better.