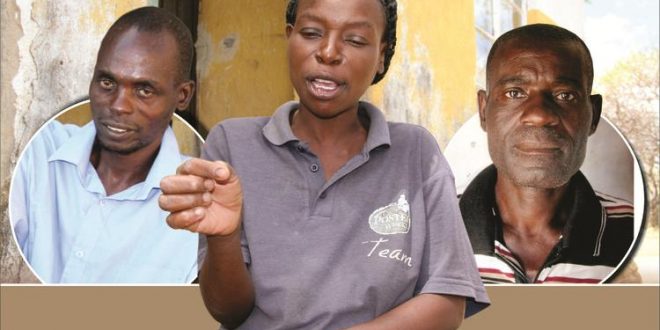 Meet Chako, the woman with 2 husbands

In Zimbabwe, a woman, Jack Chako,  who sleeps and have sex with two husbands in the same room and same house is trending on the internet.

Her story  is not a script for a Nollywood film, but reality, according to a report by Zimbabwe Daily, which said polyandry is gaining acceptance  in the country of Robert Mugabe.

There is no statistical basis for it, the newspaper reported as there are more women in Zimbabwe than men, 52 to 48 per cent.

Here is an excerpt from the report:

FOR more than a decade, Jack Chako (38) of Bolon Farm in Raffingora has been living happily with her two husbands, Michael Hwita and Liford Chimoto, with whom she shares one bed.

Chako is the head of the family and always eats from the same plate with her two husbands, and during meals, she picks up meat first as the head, followed by the senior husband Chimoto then the junior husband Hwita, in that chronological order.

“We are a happy family, I live with my two husbands and we love one another. My two husbands are best friends and they are always together,” boasted Chako.

She says the two men have different roles and between the two is a senior husband and his junior. And according to her, Chimoto is the elder husband hence the senior while Hwita is the junior.

Chako brazenly claims that she “married” the second husband Hwita because Chimoto “is elderly and increasingly becoming weak in bed”.

“I love both men. They have different strengths. Chimoto fetches a lot of firewood and cleans up the house well but he is weak in bed and weak when it comes to fending for the family. The reason why I married a second husband is that Chimoto was starving me sexually.

“Hwita is also technically minded. He repairs a lot of broken goods, including cell phones and cobbles shoes too, making him bring some cash home. His biggest strength is he is excellent and strong in bed.

“To be honest, in terms of conjugal rights I favour Hwita. He gets me there. I only do it with Chimoto as a token. At times, I feel pity for Chimoto and give him token conjugal rights and he appreciates that. The rule is no one gets out of the room, because he is not on duty. Whoever is not on duty, just watches us at it,” narrated Chako

She maintains that she was in charge and his two husbands are now used to sleeping side by side in one bed.

“They don’t mind and they both appreciate each other for the different roles each play to the family,” she said

Chako — a mother of five, three children from a previous marriage and two from this polyandrous affair — says all the two children she has in this set up are from Hwita.

She claims she used some concoction to pacify his two men.

“It is not a secret that I used a concoction to cow them down. I also sell this concoction to other women to cow down their errand husbands and make them compliant.

“None of my two husbands wishes to leave me. Initially I only had Chimoto but I ran away from him and went to my parents’ home because he was not satisfying me sexually and I was tired of stealing sex from neighbouring boys and men. But he followed and pleaded until my parents ordered me to take him back.

“ I then gave him a condition that I should get another man to help him in bed and he agreed. This is how I got the second one.

“Since then, we live happily and enjoy our life, although we know that the generality of people around us do not like it,” says Chako.

Both Hwita and Chimoto said they don’t have problems taking Chako says their joint wife.

“I see no problem. She loves both of us and we understand our situation. I respect Chimoto as the elder husband because I found him here.

Chimoto added, “I know my failings and I appreciate the decision which was taken, we have various duties and life goes on.”

But Chako is not the only woman in polyandry. In sprawling Epworth, on the outskirts of Harare, is one such super woman, Ellen Svova, who cohabits with two husbands, Kefas Takawira (40 and Tambudziko Svova (60).

The polyandry family has set tongues wagging in the neighbourhood but unlike in Chako’s situation, Elen claims she did not use concoction to cow her two husbands. Theirs is a bizarre love situation.

“I don’t use concoction. My first husband Svova is ageing so he was no longer satisfying me in bed so he gave me the green light to have a second husband,” she claims.