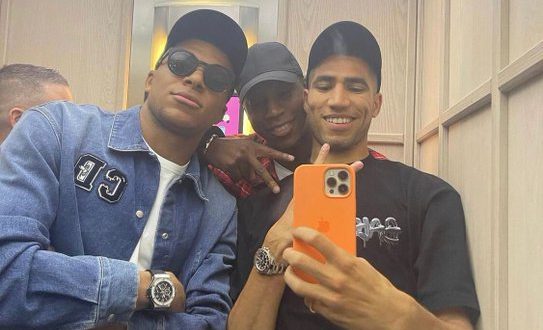 Mbappe visits Madrid ahead of blockbuster transfer from PSG

KYLIAN MBAPPE has sparked rumours he could be closing in on a move to Real Madrid after being spotted in the Spanish capital.

The striker, 23, was snapped heading into a Madrid restaurant alongside Paris Saint-Germain team-mate Achraf Hakimi on Monday.

Mbappe has been heavily linked with a move to Real and his presence in Madrid has fuelled speculation he could be set to make a summer switch.

The Frenchman confirmed his presence in Spain on Instagram, posing for a photo with Hakimi and the defender’s brother.

Spanish newspaper AS published that snap on their front page with the headline “Bienvenido” – welcoming Mbappe to Madrid.

Mbappe captioned the post: “Off” – a possible hint that the forward is set to make a move.

However, the entire PSG squad is enjoying a few days recovery with the players expected back on Wednesday.

But the fact Mbappe chose to visit Madrid of all places has strengthened the belief he is set to sign a contract with Los Blancos.

In recent weeks there was talk of Mbappe making a u-turn and renewing his deal with PSG.

His mother Fayza Lamari travelled to Doha, Qatar to speak with PSG chiefs – President Nasser Al-Khelaifi is said to be offering the striker £150million to sign on for just one more year.

A report last week claimed Mbappe had agreed in principle a new two year contract worth £820,000 a week.

PSG boss Mauricio Pochettino also said he was 100 per cent sure both he and Mbappe will stay at the club.

But Real could make a new and improved offer for Mbappe after missing out on a top target in Erling Haaland, who is set to join Manchester City.