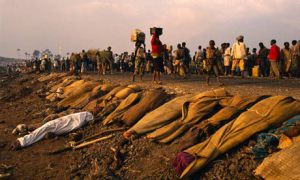 A fresh mass grave, containing 120 bodies of victims of the 1994 Rwanda genocide, has been discovered in the Gasabo district of Rwanda, Theogene Kabagambire, head of the association of genocide survivors in the district, told local media on Monday.

Kabagamibire said the victims could have been led to the particular killing in the guise of taking them to a safe place. According to him, residents had dug up more than 20 meters deep to exhume the remains. He said survivors would identify their dead loved ones by their clothes.

While faulting genocide perpetrators for concealing information about the mass grave for over two decades, he added there could be more of such graves in the area.

“We are continuing the process of exhumation of the remains to give them a decent burial but there could be other mass graves nearby,’’ said Kabagamibire.

Recall on April 6, 1994, then Rwandan President, Juvenal Habyarimana was killed in an air crash, which triggered a three-month-long genocide between the Hutus and the Tutsis. The war claimed an estimated one million Tutsi and a much lesser number of the Hutus.

Writer, Investigative Journalist, and Social Media Strategist
Previous Xenophobia: Nigerian Man Burnt To Death In South Africa
Next My Daughter Seduced Me Into Having Sex With Her – Father