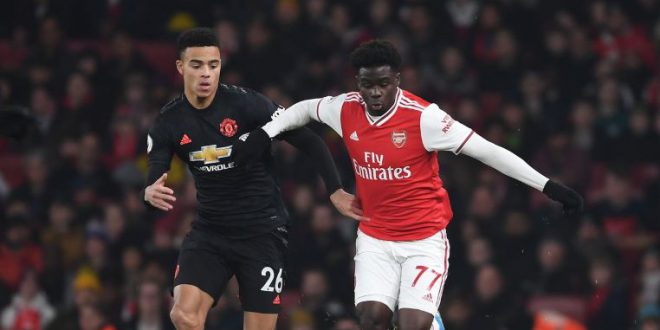 Mason Greenwood and Bukayo Saka are among six Premier League youngsters who have been nominated for the Golden Boy award.

The Manchester United striker and Arsenal winger are on the illustrious list of 40 nominees, which spotlights the best young talents across Europe.

The Golden Boy award is won by Europe’s best youngster aged U21 in a calendar year and began in 2003.

Greenwood has had a fine start to the season, already netting three times in four games this season.

The two-footed striker has impressed in a Manchester United team that lost midweek to BSC Young Boys, conceding a last-minute goal.

Saka thrilled at the rearranged European Championships, forcing his way into Gareth Southgate’s starting XI and becoming one of the stars of the summer.

And he continues to be a shining light for an Arsenal team that has registered their worst start to a Premier League campaign.

The other four Premier League players on the list of 40, which will soon be cut to 20, are Wolves ’ Rayan Ait-Nouri; new Tottenham signing Bryan Gil; Leicester wing-back Luke Thomas and Saka’s teammate Gabriel Martinelli.

Haaland dominated the competition last year with his immense scoring feat, but this year there is not as obvious a winner.

Barcelona ’s Pedri has played relentlessly this year, through La Liga, the Euros and the Olympics before returning to Barcelona without a break, but has impressed with his passing and is a bright spark in a struggling Barcelona team.

Spanish media are heavily tipping him as a favourite.

Borussia Dortmund’s Jude Bellingham has been nominated as well and continues to pass every test set in front of him.

Bayern Munich’s Jamal Musiala is another standout nominee who has become a key player for the German giants under new boss Julian Nagelsmann.

Bayern Munich’s Jamal Musiala is another standout nominee who has become a key player for the German giants under new boss Julian Nagelsmann.

The tricky attacker chose to represent Germany over England and has already made his debut for the national team, playing under former Bayern boss Hansi Flick.

Charles Igbinidu is a Public Relations practitioner in Lagos, Nigeria
@https://twitter.com/ionigeria
Previous David Beckham in talks with Lionel Messi over move to Inter Miami when his PSG contract expires
Next 2023: No automatic ticket for Jonathan, new defectors – APC