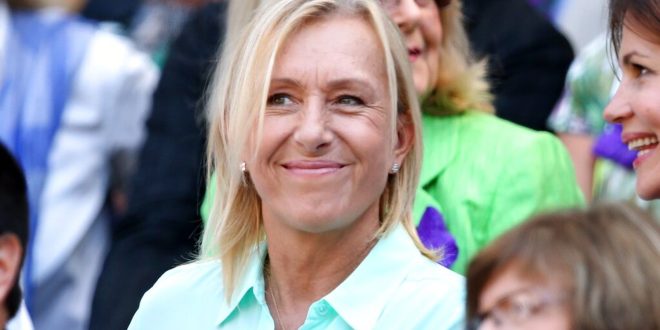 Tennis legend Martina Navratilova has been diagnosed with throat and breast cancer.

The ex-world number one previously underwent treatment for early-stage breast cancer in 2010.

The 66-year-old said: “This double whammy is serious but still fixable, and I’m hoping for a favourable outcome.

“It’s going to stink for a while but I will fight with all I have got.”

Navratilova – who won 59 grand slam singles and doubles titles – will not travel to the Australian Open later this month, where she was due to work as a TV pundit.

A statement from her representative described the prognosis as “good”.

“Martina Navratilova has been diagnosed with stage one throat cancer,” the statement said. “The prognosis is good and Martina will start her treatment this month.

It added that the cancer is HPV and is a type that responds “really well” to treatment.

“Martina noticed an enlarged lymph node in her neck during the WTA finals in Fort Worth. When it didn’t go down, a biopsy was performed, the results came back as stage one throat cancer.”

The statement said the breast lump was also diagnosed as cancer and was “completely unrelated” to the throat cancer.

When Navratilova was undergoing tests for the throat, doctors found a “suspicious form” in her breast.

The statement said the breast lump was also diagnosed as cancer and was “completely unrelated” to the throat cancer.

“Both these cancers are in their early stages with great outcomes. Martina won’t be covering the Australian Open for Tennis Channel from their studio but hopes to be able to join in from time to time by Zoom,” it said.

Navratilova announced that she was being treated for breast cancer back in April 2010 after a routine mammogram revealed she had ductal carcinoma in situ in her left breast.

She had the tumour surgically removed before receiving radiation therapy.

Charles Igbinidu is a Public Relations practitioner in Lagos, Nigeria
@https://twitter.com/ionigeria
Previous FIFA to ask every country to name a stadium in honour of football great Pele, Gianni Infantino says
Next Arsenal ‘trigger clause in Bukayo Saka’s contract to keep him at club for another year’ amid Man City transfer interest