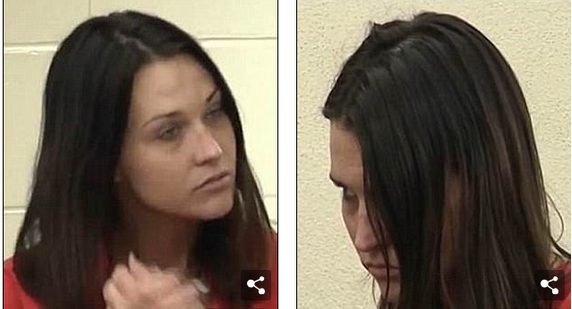 A former Florida middle school teacher has pleaded guilty to having sex with a 14-year-old student and sending him nude pictures.  Stephanie Peterson, 27, pleaded guilty as part of a plea deal to one count of lewd or lascivious battery sex act with a child and one count of transmission of harmful material to minors by electronic means. Both are felonies.

Peterson will face a minimum of five years and a maximum of 10 years in prison when she is sentenced.

The former New Smyrna Beach Middle School science teacher was arrested in February after the 14-year-old told his parents about their relationship.

He confessed to his parents that Peterson would pick him up from their home at 11pm and that they often spent hours together at her home while her firefighter husband was at work.

The teen claimed he had sex with Peterson in her house and car as well as a barn behind his own house from November 2017 to January 2018.

He also revealed that Peterson had sent him nude photographs of herself and that she bought him marijuana and a ‘bowl to smoke it’ in.

The teen reportedly told his parents that his relationship with the teacher was hurting his grades.

Snapchat messages between Peterson and the teen were released by the State Attorney’s Office earlier this month.