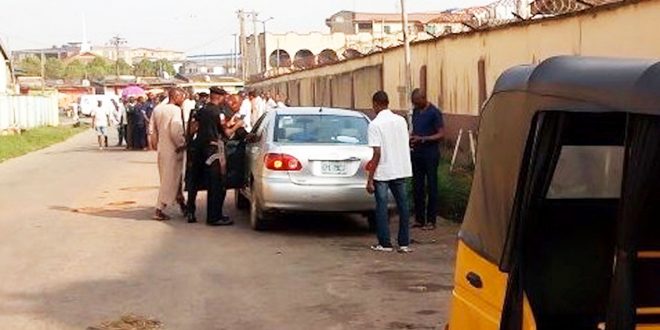 Abisogun Leigh Street, Ogba, Lagos State was the cynosure of all eyes on Sunday when two apparent lovebirds were found dead in a Toyota Corolla parked by the roadside.

One of the eyewitnesses who took to Twitter to post a picture, Acoustich Anah, wrote, “I just saw the weirdest and saddest thing. I saw people gathered watching a car. Initially I thought it was an accident but it wasn’t.

“I saw a man and a woman both naked the engine of the car still running even the AC is still on. They apparently were having sex and died

They alerted operatives of the Area G Police Command, who opened the car door and found them dead.

While the man was reportedly met half naked on the driver’s seat with his private parts exposed, the woman was said to be in a gown, reclining on the passenger’s seat beside him.

A brand of alcoholic drink – Best –  and their phones were allegedly recovered from the car around 9am on Sunday.

A credible source at the Area G Command confided in our correspondent on Tuesday that the police were looking for the friends.

“For now, investigation is not pointing to a murder case. However, the investigation is still at a preliminary stage. We are looking for the friends they (the deceased) attended the birthday party with to get information on what transpired at the event,” the source said.

The Lagos State Police Public Relations Officer, ASP Olarinde Famous-Cole, said the command would explore all the investigative angles to the incident.

He said, “It is still a case of sudden and unnatural death. We will leave no stone unturned. The families of the deceased will be interviewed. Investigation will be thorough to know if there was a foul play.”