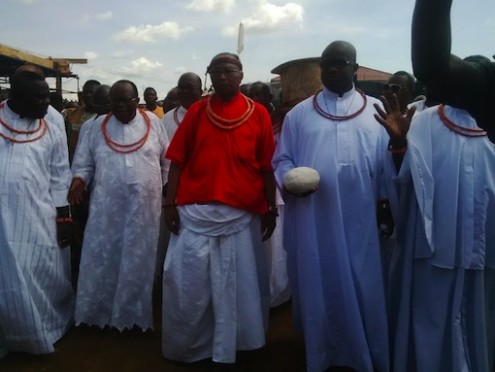 Markets to be closed, males to shave hairs as Oba of Benin’s death is announced 15 months’ after

About 15 months after he joined his ancestors, the Benin Traditional Council‎ on Friday formally proclaimed the death of the Oba of Benin, Omo N’Oba n’Edo, Uku Akpolokpolo, Oba Erediauwa.

In accordance with the Benin traditional mourning rites for a translated Monarch, every male in the kingdom is expected to shave his head throughout the mourning period that may last for up to three months, while all markets in the kingdom are to remain closed for about seven days.

The announcement was made by the Prime Minister and Iyase of Benin Kingdom, Chief Sam Igbe, in company of other traditional Chiefs and Enigies (Dukes), with the traditional braking of native chalk at the entrance of the palace.

It would be recalled that ionigeria.com broke the news of the death of the monarch in February 2015.

While announcing the translation, the Iyase‎ said: “Osorhue Bunrun. Oba Erediauwa of Benin Kingdom, the Prince of Peace, Ebo, Ayemwirhe, emini mini, has returned with his ancestors. May he find perfect peace with God.”

Following the breaking of the native chalk at the main entrance of the palace, all the chiefs and enigie broke down in tears and wailed for the translated monarch.

The Benin Crown Prince and Edaiken of Benin, Eheneden Erediauwa, who arrived at the palace at about 1:10PM from his Uselu resistance, was formally informed of the translation of his father, before it was publicly announced.
The late Monarch was crowned Oba of Benin in March, 1979.