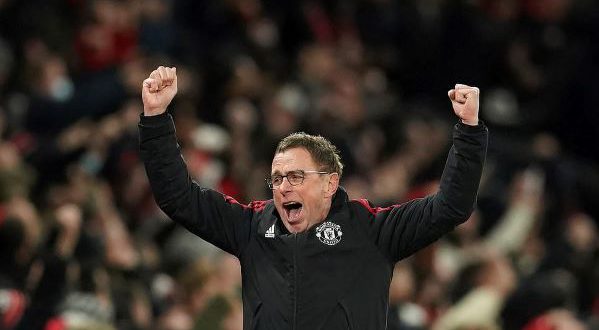 United had mustered only one shot on target before Old Trafford was sent wild when Rashford turned in a cross from fellow substitute Edinson Cavani.

VAR looked a very close offside call involving Cavani when he received the ball but the decision to allow the goal sparked renewed celebrations in the ground and smile from manager Ralf Rangnick following a previously frustrating afternoon. 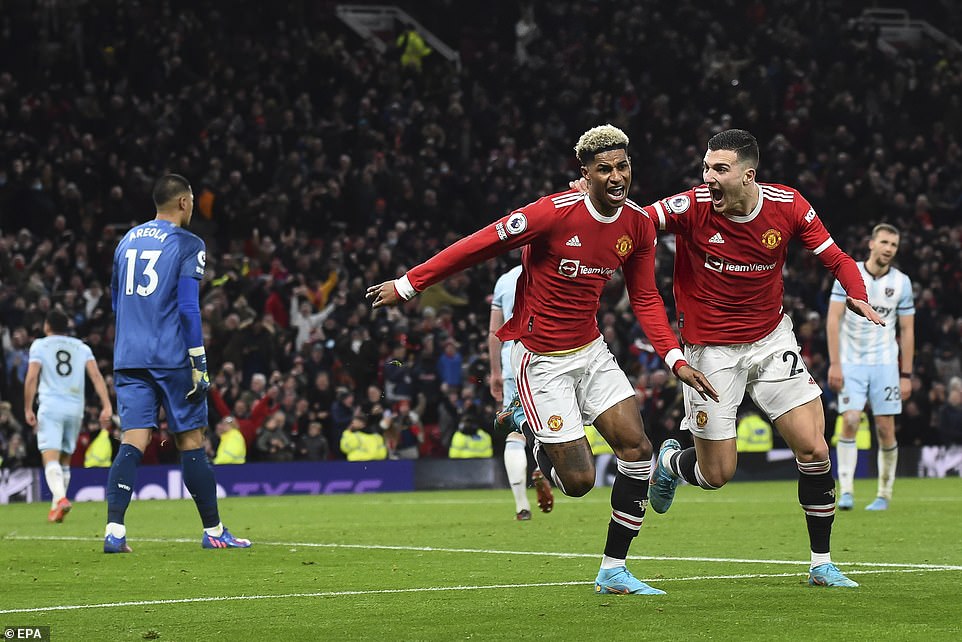 Anthony Martial fed Edinson Cavani on the left, he fired low across the penalty area and Marcus Rashford scrambled in having been usurped in the starting line-up by Anthony Elanga in recent games.

Old Trafford went crazy like times of old but there was still a modern twist to the drama with VAR undergoing a long check to see if Cavani had been offside when receiving the ball.

It looked desperately close but technology ruled in United’s favour and Rangnick was able to smile for virtually the first time on an otherwise anguished afternoon.

‘If you score in the last second of the game that is the best type of wins, particularly with a clean sheet. I think in the end we deserved to win,’ said the German.

‘It takes patience to play West Ham. A few moments at the end I wished we would have passed the ball instead of shooting from wherever.

‘Bearing in mind we played a few days ago against Brentford, the team looked physically good. The way we played defensively, won balls back, I was really happy.

‘I am very pleased the three subs prepared scored the goal. All were involved. That makes it even more important.’

United were better than in recent weeks with Cristiano Ronaldo looking interested in link-up play as well as scoring goals, and skipper Harry Maguire aggressive in his challenges as he returned for Victor Lindelof, playing particularly hard with his former Hull team-mate Jarrod Bowen.

But it was still far from a vintage display with Alphonse Areola’s only save coming from Fred before Ronaldo tested him with a shot from an offside position.

Though Ronaldo had justifiable claims for a penalty at the end of the first half when Kurt Zouma barged him in the back, the home side wilted in the second period and West Ham looked the likelier scorers at the end. 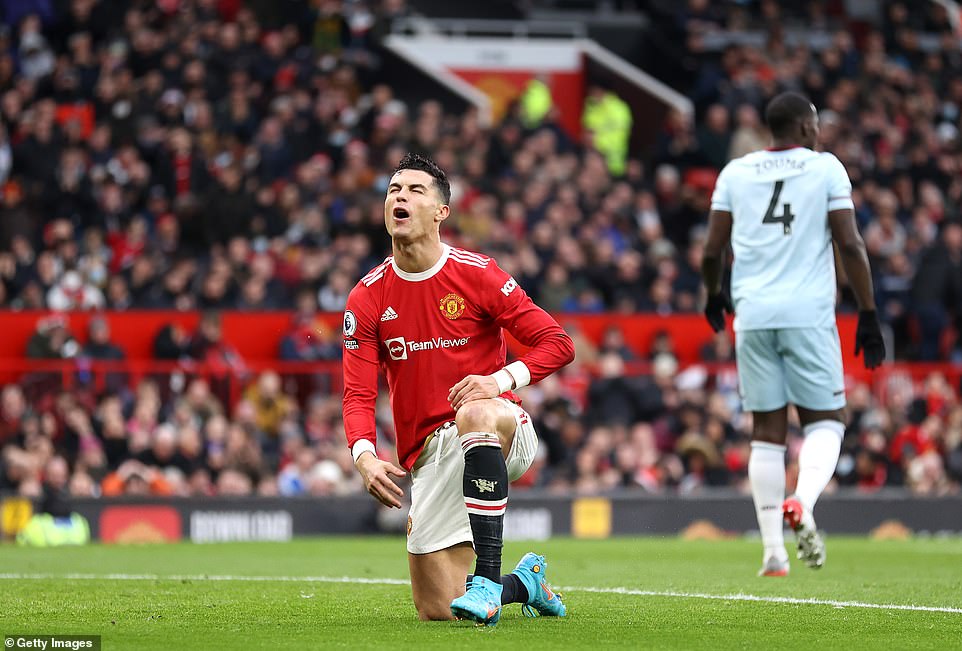 Cristiano Ronaldo’s frustration boiled up again as he struggled for service, and raged when Kurt Zouma felled him in the box

David de Gea had to pull off a great reflex stop to prevent a Raphael Varane deflection from creeping over the line.

But United’s late breakthrough enabled Rangnick to celebrate consecutive wins for the first time. It won’t be enough to extend his tenure beyond the season when United will seek for a longer-term solution like Mauricio Pochettino but it was improvement on their last home league game, a miserable 1-0 home defeat against Wolves.

West Ham have been this season’s surprise Champions League contenders though they suffered a setback losing at home to Leeds last weekend.

Manager David Moyes, who was the first person to try and replace Ferguson at Old Trafford, had never won in the league as an opposition manager at the stadium but had been buoyed by knocking United out of the EFL Cup earlier this season.

Maguire, replacing Victor Lindelof whose family had been involved in a disturbing burglary at home last week, set the tone for United with strong and well-timed early tackles on Bowen and Michail Antonio.

United’s attackers also pushed forward with purpose but too often made the wrong final decision. Ronaldo had to gesture his displeasure more than one towards Mason Greenwood after the striker selfishly decided to shoot rather than pass – and was nowhere near scoring. 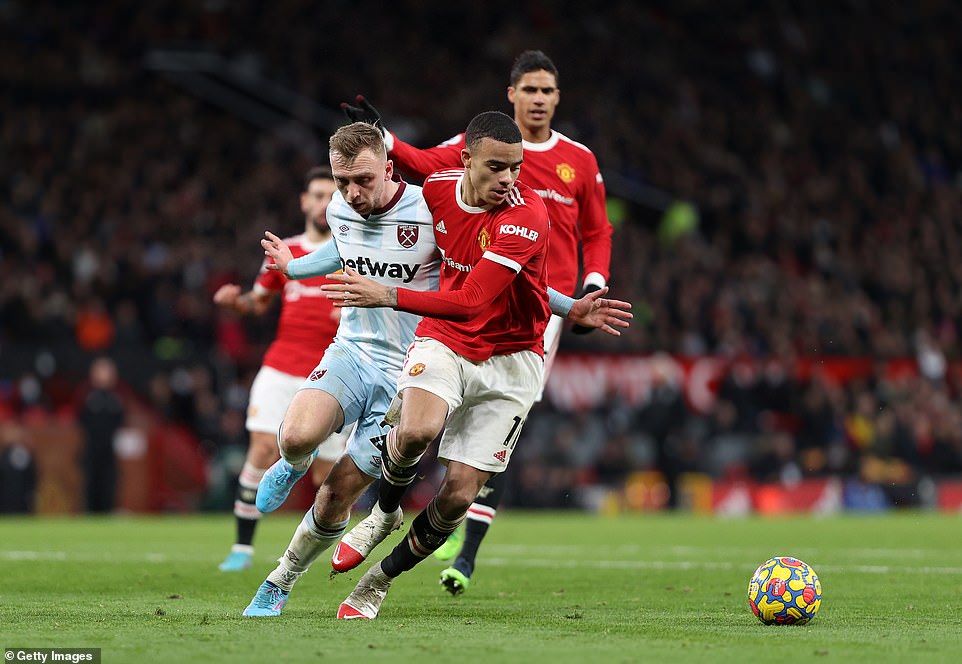 Mason Greenwood struggled to have much impact, while Jarrow Bowen put in a hard-running performance in the attack 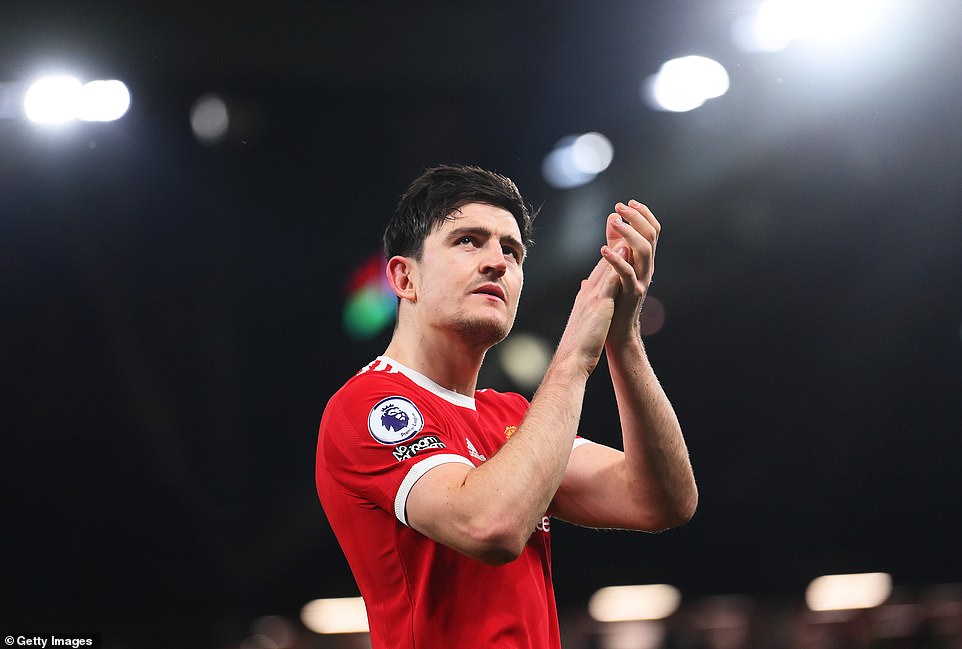 Harry Maguire stepped back into the United team after being benched at Brentford, putting in a rock-solid performance

Ronaldo, showing no hangover from a neck strain picked up in training, was close to connecting with a Fernandes cross, flying horizontally at the ball. Diogo Dalot got up from right-back and headed wide.

Ronaldo then waved his arms in the air appealing for a penalty when he burst goalside of Kurt Zouma and fell trying and reach a cross from Alex Telles.

The 36-year-old was convinced he’d been shoved from behind. VAR didn’t overturn the original decision from referee Jonathan Moss but replays suggested Ronaldo was unfortunate with Zouma putting both arms around the United striker and knocking into him.

Fred produced the first shot on target of the afternoon on 49 minutes with Alphonse Areola leaping to his right to palm away.

Maguire was booked for another bruising challenge on Bowen and Rangnick finally showed his bold side by sending on three new attackers for the closing stages. 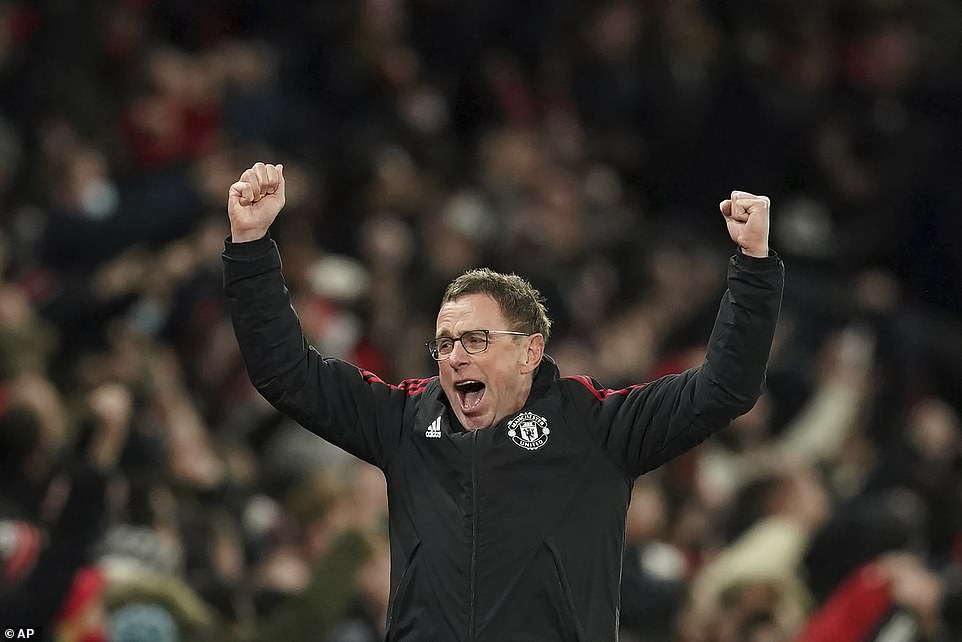 At first it looked as if the gamble would backfire as the home side suddenly looked more vulnerable at the back. De Gea stopped Varane from registering an own goal and then Tomas Soucek was a whisker away with a header from Bowen’s corner.

But it’s in Manchester United’s DNA never to stop going for it. Even when Martial fluffed his lines after 92 minutes, taking a poor touch as Fernandes found him in the area, one very final chance arrived.

Ronaldo dropped deep to receive a pass from Alex Telles and move on to Martial. He fed Cavani outside him and Rashford converted.

It is the first time he has scored in consecutive Premier League games since December 2020 and the celebrations were appropriately ebullient, both before and after VAR

Charles Igbinidu is a Public Relations practitioner in Lagos, Nigeria
@https://twitter.com/ionigeria
Previous After Hanifa Abubakar, abductors kill another 8-year-old girl after N3m ransom in Zaria
Next How my neighbour abducted, killed my 8-yr-old daughter after paying N3m ransom — Zaria man