The Manchester United striker was given the honour by Prince William

The football star picks up his MBE from Prince William, who is hosting his first investiture ceremony since the COVID pandemic began.

Manchester United star Marcus Rashford has received an MBE for his campaigning work from Prince William.

Rashford, 24, got the honour for services to vulnerable children after a high-profile campaign to force the government to change policy over free school meal vouchers during lockdown.

It meant many children were able to get the meals during the holidays.

He dedicated the MBE to his mother as he vowed to continue his campaigning, adding that his motivation was to give youngsters the things he did not have when growing up. 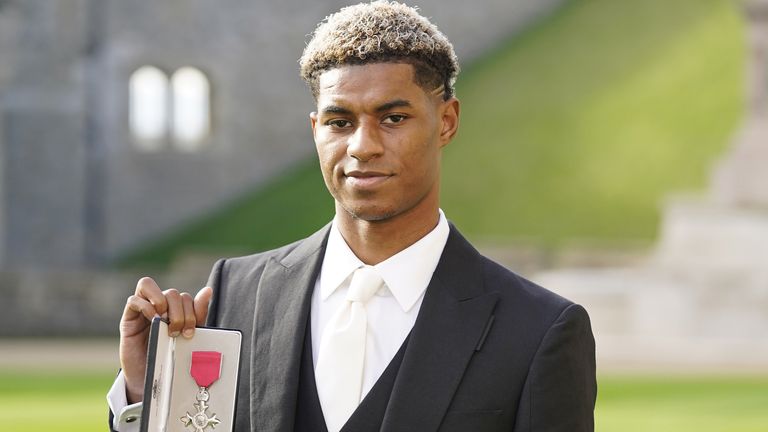 Speaking after a Windsor Castle investiture ceremony, the striker said he would be giving his MBE to mum Melanie Rashford, who he took along to the ceremony.

He said: “It seems like there’s a lot going on but for me to put it in the simplest way – I’m trying to give children the things I didn’t have when I was kid. If I did have, I would have been much better off and had many more options in my life. 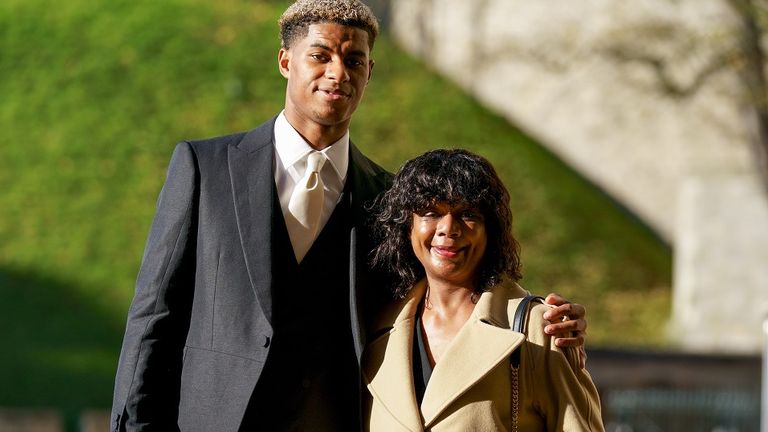 “I’m just giving them the opportunity and I think they deserve the opportunity, what child doesn’t. For me it’s a punishment for them not to be getting things like meals or supplies of books.

“And if we can all come together to make these small changes – they are small changes but they become big changes once you see the rewards of it – I see a generation that’s coming after me as a very special generation. They just need a bit of guidance and pointing in the right direction and what I’m doing is giving them that.”

The footballer is continuing to campaign on child food poverty issues and has formed a taskforce that includes major supermarkets and food brands.

Rashford also this year became the youngest person to top The Sunday Times Giving List by raising £20m in donations for his campaigning.

Prince William was hosting his first investiture since the COVID pandemic started, with actress Dame Sheila Hancock among others being honoured.

Dame Sheila, who was married to actor John Thaw before his death in 2002, started in the theatre, before finding acclaim in the West End and New York’s Broadway.

William tweeted on Tuesday: “Pleased to be back doing investitures in person, celebrating people across the UK who have gone above and beyond for their country and community. W.”

Charles Igbinidu is a Public Relations practitioner in Lagos, Nigeria
@https://twitter.com/ionigeria
Previous Incredible: Brothel offers customers 30 minutes with ‘lady of their choice’ in exchange for coronavirus jab
Next Anambra: Unknown gunmen in shootout with security operatives at Ihiala