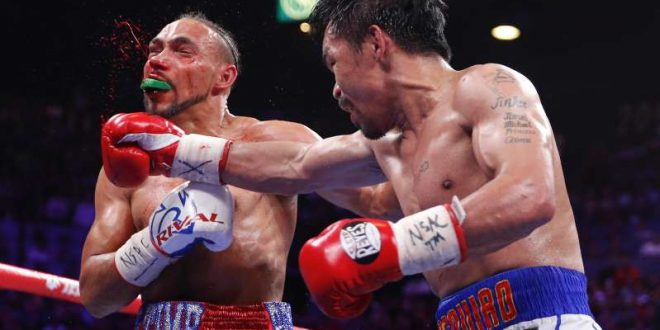 LAS VEGAS (AP) — Manny Pacquiao knocked down Keith Thurman in the first round and persevered for an exciting split-decision victory Saturday night, adding a third straight win to his career resurgence after turning 40 years old.

Pacquiao (62-7-2) dropped his previously unbeaten opponent with a combination late in the first round, and the Pac-Man dominated the opening rounds with a combination of flair and power that recalled the incredible prime of the only eight-division champion in boxing history.

Thurman (29-1) showed remarkable tenacity in rallying through the middle rounds, repeatedly testing Pacquiao’s chin with big shots. Neither fighter managed another knockdown, but they pushed relentlessly in front of a sellout crowd at the MGM Grand Garden that repeatedly chanted the Filipino senator’s name from the moment he reached the ring.

“It was fun,” Pacquiao said. “My opponent is a good fighter and boxer. He was strong. … I think he did his best, and I did my best. I think we made the fans happy tonight because it was a good fight.”

But Thurman gathered himself and soundly beat Pacquiao through the middle rounds, forcing Pacquiao to show off his durable chin. Pacquiao reversed the momentum in the 10th with a series of big shots, including a punch to the body that sent Thurman stumbling away in obvious pain.

Both fighters pushed to the final bell and embraced.

“I knew it was close,” Thurman said. “He had the momentum because he got the knockdown in Round 1. … I wish I had a little bit more output to go toe to toe. My conditioning, my output was just behind Manny Pacquiao’s tonight. Tonight was a blessing and a lesson.”

Thurman called for a rematch, and the crowd vocally approved.