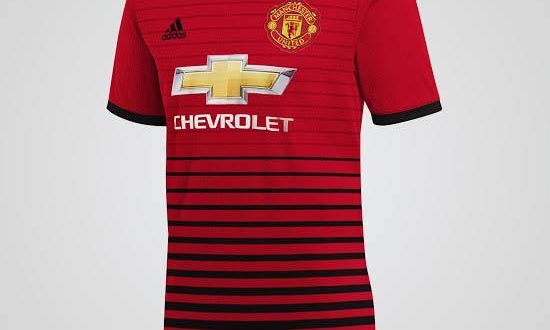 It's a bit like a Magic Eye picture (Image: FOOTYHEADLINES WS)

‘WATFORD IN RED’ Manchester United home kit for next season leaked online with design a world away from previous strips. New shirts have prominent blacks stripes and traditional white shorts set to be changed to black

Website Footy Headlines, who specialise in getting images of kits ahead of their launch, claim to have seen the United’s new release.

The new kit is a huge change from anything Adidas or former kit suppliers Umbro or Nike have designed for United in modern times.

The new Manchester United 2018-2019 home kit is set for a release in May and some United fans on social media are not impressed.

AbdullmalikSal3 blasted: “This better not be true.”

United’s new home shirt is still the traditional red but with a new twist – black stripes across the shirt that become more prominent the further down they go.

The shirts are set to black instead of the normal white and the socks are in a similar vein to the shirts with the black stripes.

Next season’s kit is “inspired by the railway men that formed the club.”

The club were formed in 1878 as Newton Heath LYR Football Club by the Carriage and Wagon department of the Lancashire and Yorkshire Railway depot at Newton Heath.

With railways in the 19th century often being red with black, it seems “clever” by Adidas to take this as inspiration for the latest design.

Charles Igbinidu is a Public Relations practitioner in Lagos, Nigeria
@https://twitter.com/ionigeria
Previous 2 Men In Court For Alleged Gang Rape Of Girl In Bush
Next We Rob Stranded Motorists With Toy Gun – Suspect