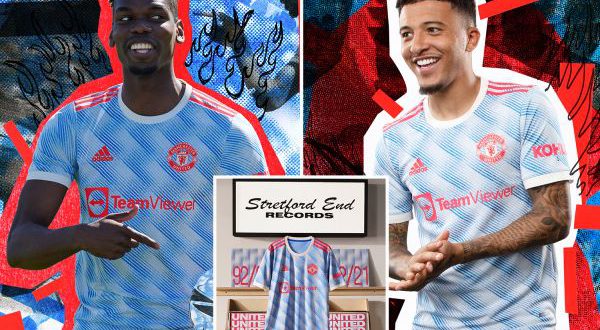 Manchester United have released their new away kit for this season – and dropped a huge hint about Paul Pogba’s future.

The 28-year-old has one year left on his Old Trafford contract and Paris Saint-Germain are reportedly interested in signing the midfielder.

The blue-and-white ‘snowflake’ design is similar to the kit worn between 1990 and 1992 as the club were begining the most dominant period in the their illustrious history.

The Red Devils won the Cup Winners’ Cup, European Super Cup and League Cup during those two seasons, with the academy winning the Youth Cup.

According to United’s official website, “This season’s away kit is special for several reasons: not only is it inspired by one of the most iconic kits in our history, it’s also been constructed with such precision and attention to detail that it’s more than just a jersey, it’s a statement too.

The club added: “You may have seen the incredible detail in our 2021/22 home kit, and we’re proud to say that the same attention to craftsmanship has gone into the away kit.

“United fans were recently surveyed in a poll to see what their favourite kit of all time is and, perhaps unsurprisingly the winner was the ‘snowflake’ away strip from the 1990-92 seasons. It’s a kit that has transcended generations and has, simply put, become a cult classic”.

the new kit is a ‘celebration of youth, defiance and the next generation’.

“We live in a world where it’s more important than ever to back your beliefs and to have resilience like Marcus Rashford, Mason Greenwood and the rest of the team have done.

“This away kit acts as a uniform for one of the most passionate outfits on earth, with nothing quite like the ferocity of youth and defiance, this is who we are.”

United’s first-team squad, including Pogba and new signing Jadon Sancho, have modelled the new kit for its official release.

The club’s decision to include the World Cup winner in their promotion is surprising considering the uncertainty surrounding his future.

It’s believed Pogba has rejected a new contract at Old Trafford and PSG are reportedly considering a £40million offer as a result.

But rumours suggest the midfielder may stay at United beyond the summer following their impressive business in the transfer window.

As well as Sancho, the Europa League runners-up have agreed a fee with Real Madrid for defender Raphael Varane.

The new kit has received mixed reviews on social media, with one fan tweeting: “I think I’ll get this one.”

While another wrote: “Fact: United have the most beautiful set of kits for the 2020-21 season.”

But others think it looks like a Manchester City kit, with one supporter joking: “Manchester is finally blue.”
Share