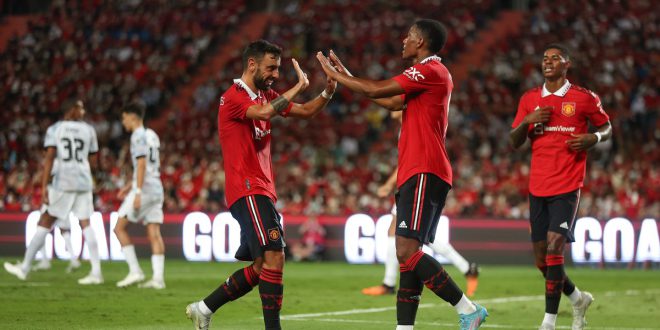 New Manchester United boss Erik ten Hag got off to a winning start in the dugout with a comprehensive three-goal win over Liverpool in Bangkok.

First half goals from Jadon Sancho, Fred and Anthony Martial before substitute Facundo Pellestri added a fourth after the break propelled United to victory over an experimental Liverpool side, who twice made wholesale changes to their line-up. A much-more experienced Red Devils outfit dominated the first half but they too made ten outfield changes in the second half.

Jurgen Klopp introduced Mohamed Salah, Andy Robertson, Virgil van Dijk, Trent Alexander-Arnold, Fabinho and Darwin Nunez for the final thirty minutes against a much-changed United side but they could not make a breakthrough as Pellestri added a fourth goal on the counter-attack in the 75 th minute.

With both sides intent on avoiding injuries, Ten Hag may have a small concern over David de Gea’s fitness after the Spaniard had to be substituted off with muscular discomfort in the second half.

Here are five talking points as United won the pre-season Bangkok Centenary Cup against their rivals.

Erik ten Hag watched on from the sidelines during his first match as United boss ( Image: Supakit Wisetanuphong/MB Media/Getty Images)

United’s first game under their new boss saw them line up in a 4-2-3-1 formation, similar to the setup Ten Hag relied upon at Ajax. This was also the system that was most commonly in-place during Ole Gunnar Solskjaer ’s time in the United dugout, but it was not just the shape that was the same as under Norwegian.

Jadon Sancho playing on the right of attack – where he thrived for Borussia Dortmund – rather than on the left, as was commonly seen under Ralf Rangnick, was notable, with Marcus Rashford on the left and Bruno Fernandes adapting the deeper role behind central striker Anthony Martial.

This, in addition to the midfield base of Scott McTominay and Fred, was the general outline of a system under Solskjaer prior to the arrival of Cristiano Ronaldo which offset the team’s balance.

Ten Hag dished out tactical instructions to his players ahead of the game ( Image: Vachira Vachira/NurPhoto via Getty Images)

While the system and shape between Ten Hag and his predecessor was similar, there were very notable tactical adaptations that are a blueprint of the Dutchman’s coaching. Despite the sweltering heat and humidity of Bangkok, United pressed as a unit and constantly pressurised Liverpool’s defensive line.

This was notable throughout the game and it prompted multiple forced individual mistakes in their opponent’s defence, leading to huge opportunities. This was arguably the biggest downfall of Solskjaer’s time at United last season and the most underwhelming part of Rangnick’s tenure – the inability to adapt a coherent team pressing system.

Ten Hag achieved this with United playing a high defensive line, allowing the team to be more compact and reduce the gaps between each aspect of the team. Moving across the pitch as a team compared to individually was clear from this clash.

Jadon Sancho was a threat for Liverpool’s defence throughout his time on the pitch ( Image: Pakawich Damrongkiattisak/Getty Images)

Jadon Sancho was the standout performer of United’s starting line-up and not just because of his composed finish which gave his side in the 12 th minute. It was a perfect placement and power from Sancho, taking advantage of an error in the Liverpool defence.

The England international was predominantly playing on the right side of a three-man attack, as had been United’s intention when he initially joined the club, but he was at home in a fluid attacking system with constant interchanging with Anthony Martial and Marcus Rashford.

Indeed, Sancho’s finish came from the left side of the area, as he needed to cut-in onto his right foot, while Fred’s goal came after he was charging down the middle of the pitch. This makes it particularly hard for defenders to mark and helped explain United’s attacking threat.

No Ronaldo, no problem?

There has been no shortage of talk about the absence of Cristiano Ronaldo, who has not yet joined United’s pre-season due to ‘family reasons’ and is not involved in this pre-season tour. However, this was a useful look at how the side could cope in the absence of the Portuguese superstar.

Of course, the opposition were largely a makeshift defence and this was only a pre-season friendly, but it was an indication of how fluid and cohesive United’s attack can be. Rashford, Martial and Sancho are all versatile forwards with a mix of pace, tricks and tactical awareness.

Ronaldo, who bagged 24 goals last term, is an astonishing goalscorer but there are plenty of doubts that United cannot play with the same intensity and balance in their attack with him in the side. If he was to depart, there is no shortage of talent in his immediate replacements.

And in the absence of Ronaldo, the onus of a central striking option rests on Anthony Martial. The Frenchman has predominantly enjoyed playing in a left-sided attacking role during his career, but he did impress in a more central role under Solskjaer during the 2019-20 campaign.

That season, Martial netted a career-best 23 goals and he looked comfortable in that role during this friendly. His solo goal was a fine individual effort, forcing a defensive mistake and taking advantage with a direct run and cool, chipped finish over Alisson Becker.

Aged 26, Martial should be in the prime of his career but he netted just one goal in 11 United appearances last season and just once in 12 outings for Sevilla, whom he joined on loan in January. He is now back at Old Trafford and could be about to enjoy a new lease of life at Old Trafford.

There was much less for Liverpool to learn from this game as it will be very much more of the same for Jurgen Klopp this season, while they have had a week less of pre-season than United ahead of this clash.

Twice in this Klopp made wholesale changes with a very strong side finishing the game after a mix of youth-team promises and bit-part players featured predominantly in the first hour, many of whom may depart before the season gets underway.

The nature of the scoreline will no doubt cause some mild annoyance to Klopp and his players, but they are unlikely to read anything else into this encounter rather than building up fitness levels.