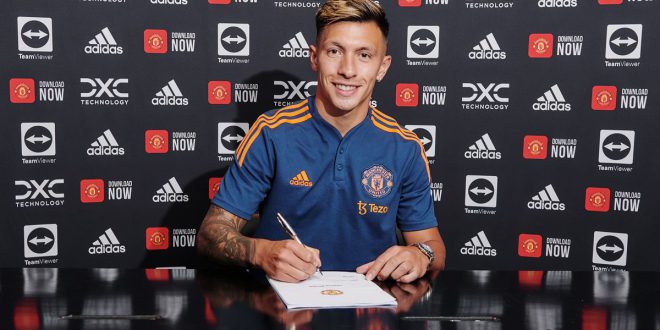 Martinez has become Manchester United’s third signing of the summer transfer window, but the announcement of his arrival was ruined after he was spotted arriving at training on Tuesday

Manchester United have finally confirmed the signing of Lisandro Martinez from Ajax, a day after he was spotted arriving at the club’s training ground.

Martinez has joined in a £55million deal, having been named player of the year at the Johan Cruyff Arena last season. The Argentine spent three years playing under new United boss Erik Ten Hag in the Netherlands, winning the Eredivisie title twice during that spell.

He becomes the third signing of Ten Hag’s reign, following in the footsteps of Tyrell Malacia and Christian Eriksen. Martinez will be a major boost to the Red Devils’ defence, which endured a challenging season as they conceded the most goals in the top seven of the Premier League.

He has penned a five-year deal with United, with the option of extending that by a further year. United only confirmed the deal at lunchtime on Wednesday, but United fans were already aware of his arrival on Tuesday when he was driven into training.

Martinez was pictured in a car with Eriksen, with the duo arriving at Carrington at 11am ahead of their first training session with the group. After seeing his transfer belatedly confirmed, Martinez revealed his delight at moving to Old Trafford.

“It’s an honour to join this great football club. I’ve worked so hard to get to this moment and, now that I’m here, I’m going to push myself even further. I’ve been lucky enough to be part of successful teams in my career,” he said.

“That’s what I want to continue at Manchester United. There will be a lot of work to get to that moment, but I firmly believe that, under this manager and coaches, and together with my new team-mates, we can do it.

“I want to thank Ajax and their fans for all the support they gave me. I had an unbelievable time there but feel the moment is right to test myself in another environment. Now I am at the perfect club to do this.”

Martinez’s arrival was not confirmed in time for him to be part of the pre-season tour to Australia. But at the time, boss Ten Hag predicted he would become a fan favourite among supporters of the Red Devils.

“He’s a warrior and I think the fans will admire him. He has an attitude, fighting spirit. He brings aggressiveness in the game, in a good way. I think we need that. But also, he’s also skilful and he can deal with the ball and he’s left-footed.

“I think the Premier League is high intensity, lots of challenges. We need such players [with fighting spirit]. Certain ideas, he knows them. That is an advantage, clearly. But also he has to adapt, to a new country, a new club, new teammates. So also a lot of things will be different.”

“We cannot wait to involve them in our squad and the fans also cannot wait. Every year it’s the same as a trainer: you want your squad complete as soon as possible. But also fans look forward to new players and what is the squad and what they can contribute and they want an identification.”