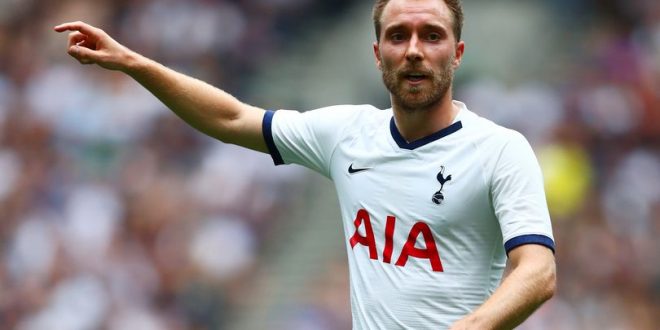 CHRISTIAN ERIKSEN is a Manchester United player after penning a three-year deal with the Red Devils.

The club announced the signing of the free agent while in Melbourne on their pre-season tour.

The former Ajax, Tottenham and Inter Milan midfielder decided to move to Old Trafford after a spell with Brentford in the second half of last season.

Eriksen revealed he cannot wait to get started as a Manchester United player and play for “a special coach” in Erik ten Hag.

Upon joining the Red Devils, Eriksen said: “Manchester United is a special club, and I cannot wait to get started.

“I have had the privilege of playing at Old Trafford many times but to do it in the red shirt of United will be an amazing feeling.

“I have seen Erik’s work at Ajax and know the level of detail and preparation that he and his staff put into every day. It is clear that he is a fantastic coach.

“Having spoken with him and learned more about his vision and the way he wants the team to play, I am even more excited for the future.

“I still have major ambitions in the game, there is a huge amount that I know I can achieve, and this is the perfect place to continue my journey.”

John Murtough, United’s football director, said the club have landed a real leader on the pitch.

He said: “Christian has been one of the best attacking midfielders in Europe throughout his career.

“It is no surprise that he had so many options this summer, so we are really happy that he was convinced that this is the right club for him.

“In addition to his outstanding technique, Christian will add valuable experience and leadership skills to the squad, and we are looking forward to seeing the benefits of these qualities on the pitch this coming season and beyond.”

The move comes just over a year after Eriksen suffered a cardiac arrest during Denmark’s opening European Championships game against Finland.

The 30-year-old will not be joining up with his new team-mates on their pre-season tour which saw them record a 4-1 win over Melbourne Victory today after beating Liverpool 4-0 in Bangkok.

Midfielder Eriksen is the club’s second signing of the season after the capture of left-back Tyrell Malacia from Feyernoord.

They will not stop there either as United are convinced Frenkie de Jong has his heart set on a move to Old Trafford.

This is despite reports in Spain that he is desperate to stay at Barcelona.

United insist they would not be chasing the player if there was any doubt over his commitment to make the move.

The problem remains a dispute over unpaid wages.

A deal for the midfielder with Barcelona has now been agreed worth £63.5million plus another £7.2million in performance related add ons.

But the Dutchman wants £24million from Barca having taken a reduction in wages during the pandemic on the understanding that the shortfall would be paid later.

Barca want United to pay it and Old Trafford chiefs are refusing.

Despite the issue dragging on, United are not going to walk away and are committed to getting the deal over the line.

This week both chief executive Richard Arnold and Murtough were in Barcelona to try to resolve the issue.

It is unlikely, however, that there is time for it all to be done and him join his new team-mates on their current tour in Australia.

Cristiano Ronaldo continues to train on his own in Lisbon having turned down a massive two-year contract worth £233.3million to play for an unnamed Saudi club.

But Ronaldo still wants a move to a European club with the prospects of challenging for the Champions League.

No such club has made a firm offer for him yet, however, and United are holding out hope that he may change his mind and decide to stay at Old Trafford.

Charles Igbinidu is a Public Relations practitioner in Lagos, Nigeria
@https://twitter.com/ionigeria
Previous Chelsea players hang out with Snoop Dogg in LA during their pre-season tour
Next Osinbajo In Hospital For Surgical Operation