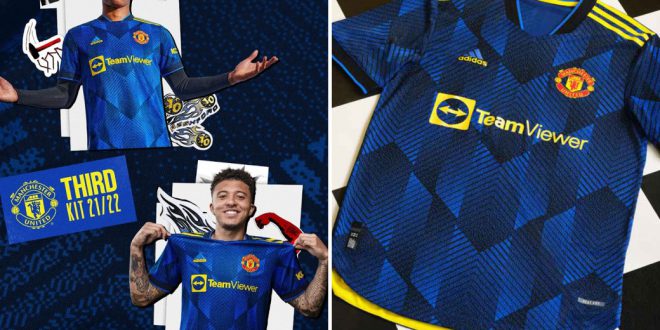 MANCHESTER UNITED in collaboration with Adidas have released their new third kit ahead of the Premier League kick-off this weekend.

The modern design features an ‘M’ ingrained into its pattern.

And sponsor TeamViewer stands out in bright yellow.

Fans will have been excited to see Jadon Sancho modelling the smart kit.

The likes of Marcus Rashford and Paul Pogba have also posed in the shirt.

And some fans online really like the blue top.

One wrote: “Its the best shirt.”

A second commented: “Three smart kits this season, best so far from Adidas.”

While a Chelsea fan added: “The only thing Arsenal and Man Utd can ever make me jealous of is the kits.”

United get their Premier League campaign underway on Saturday, as they host rivals Leeds at Old Trafford.

Then they could debut today’s release on Sunday week when Ole Gunnar Solskjaer and Co travel to St Mary’s to face Southampton.