Home / Sport / Football / Manchester United 3-2 Tottenham: Cristiano Ronaldo is back with a BANG as the Red Devils forward fires in a HAT-TRICK 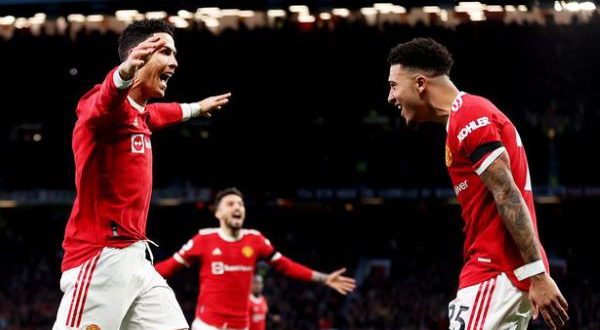 Cristiano Ronaldo was the hero for Manchester United against Spurs

Manchester United 3-2 Tottenham: Cristiano Ronaldo is back with a BANG as the Red Devils forward fires in a HAT-TRICK

Never mind the fact that he’s only scored two goals since Christmas. Never mind flouncing off to Portugal last weekend to avoid enduring the ignominy of watching his teammates being thrashed by Manchester City. Never mind the dubious dressing room vibes. Cristiano Ronaldo is a genuine miracle worker.

The old songs echoed around Old Trafford to acknowledge an extraordinary hat-trick – a thunderous strike from 25 yards, a tap in, and a glorious header – and such are his Messianic qualities you can almost believe it’s 2007-08 once again and Manchester United are a coherently-run football club.

Like watching an aging rock band past their prime perform the hits that provided the soundtrack of your youth, Ronaldo can still evoke feeling intense enough to help you forget present woes. Admittedly, it’s a fleeting feeling that lasts about as long as one of Ronaldo’s celebrations, which increasingly appear to be an invitation for his teammates to worship at the throne of CR7. 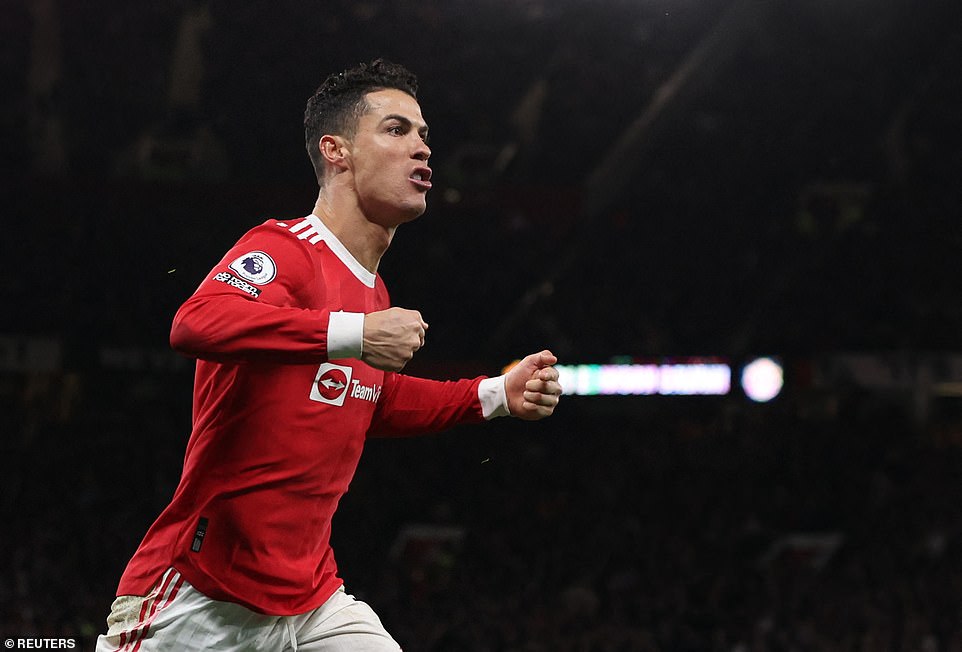 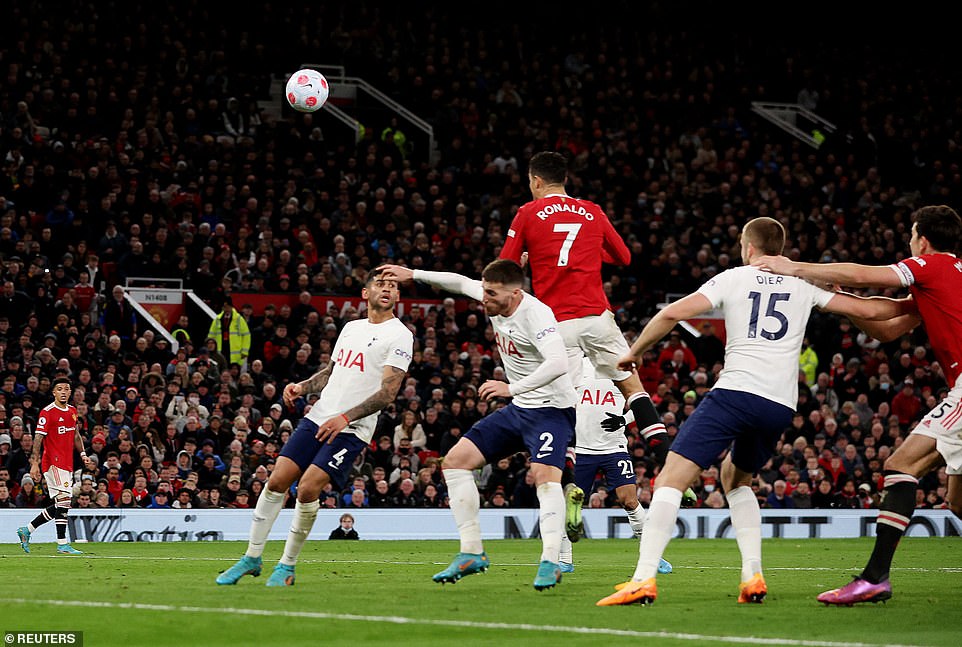 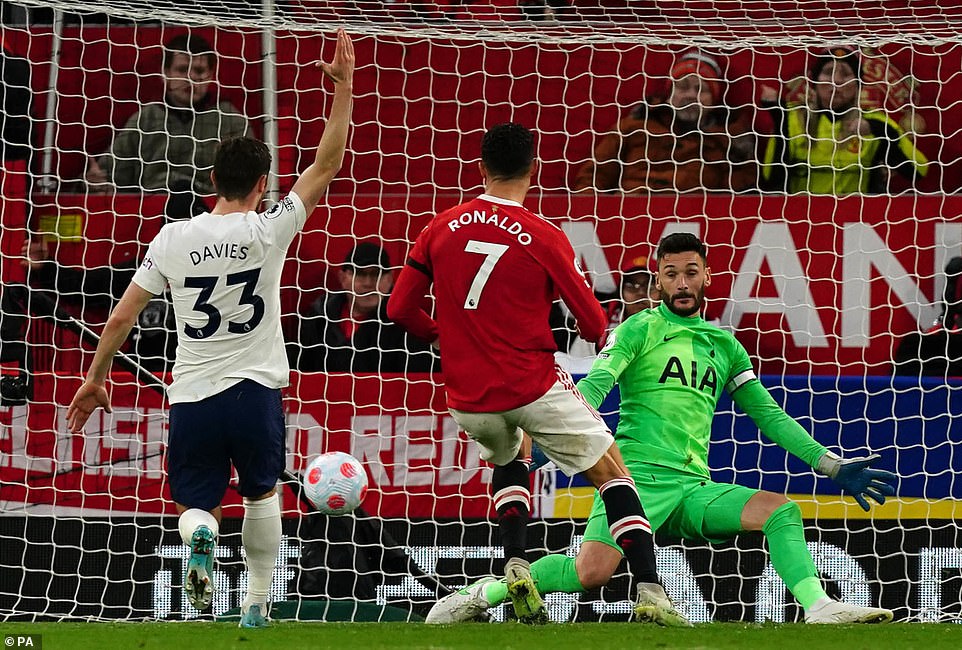 But, then again, it’s considerably better than watching your team running around haplessly and helplessly as Kevin De Bruyne and Phil Foden pass around them with contemptuous ease. So Old Trafford was willing to go with it and offer the adulation required.

What is football, after all, other than a wonderful exercise in escapism? And what dreams might these fans dream should they edge past Atletico Madrid on Tuesday night and qualify for the Champions League quarter-final for only the third time since Sir Alex Ferguson quit? You could almost patch up the dog’s breakfast of a season, apply a little make up and tell yourself it looked pretty good.

It turns out that throwing together two dysfunctional, underperforming clubs who nonetheless have an array of talented individuals results in a properly-entertaining show. You might wince somewhat at the defending, wonder a little about the number of chances a United team set out 4-2-4 concede, and despair of the lack of cohesion in Tottenham’s back three, but that would be to nit-pick a thoroughly entertaining game. 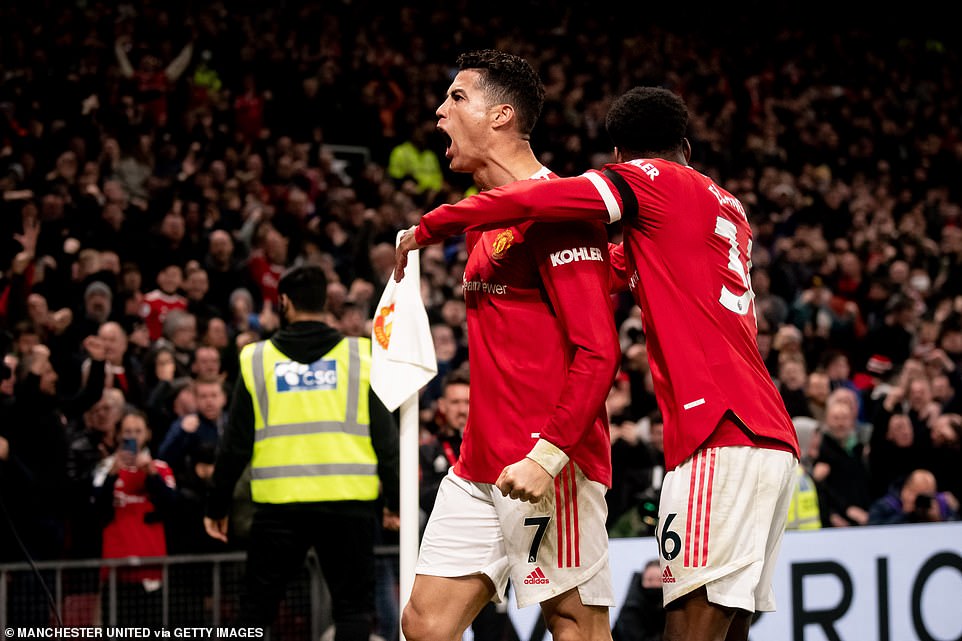 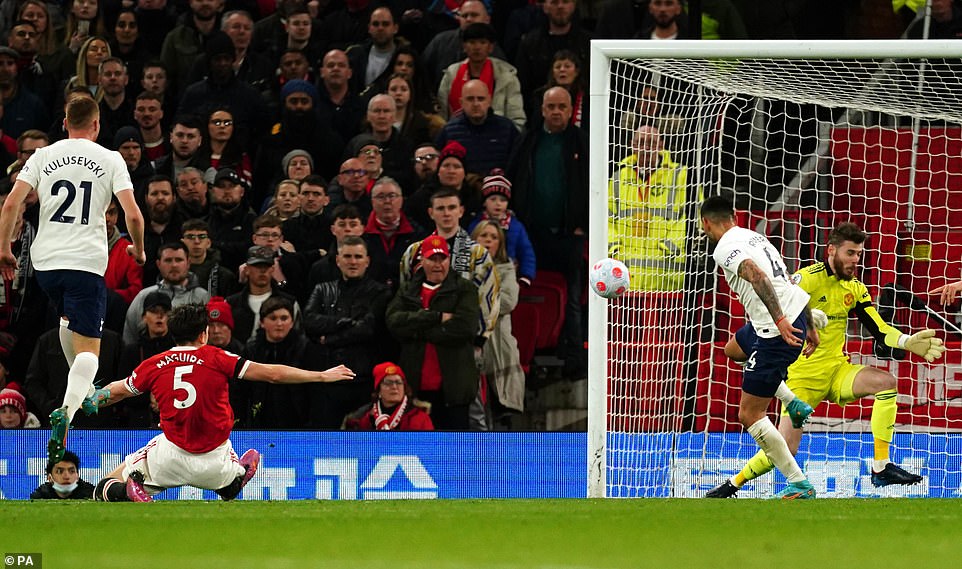 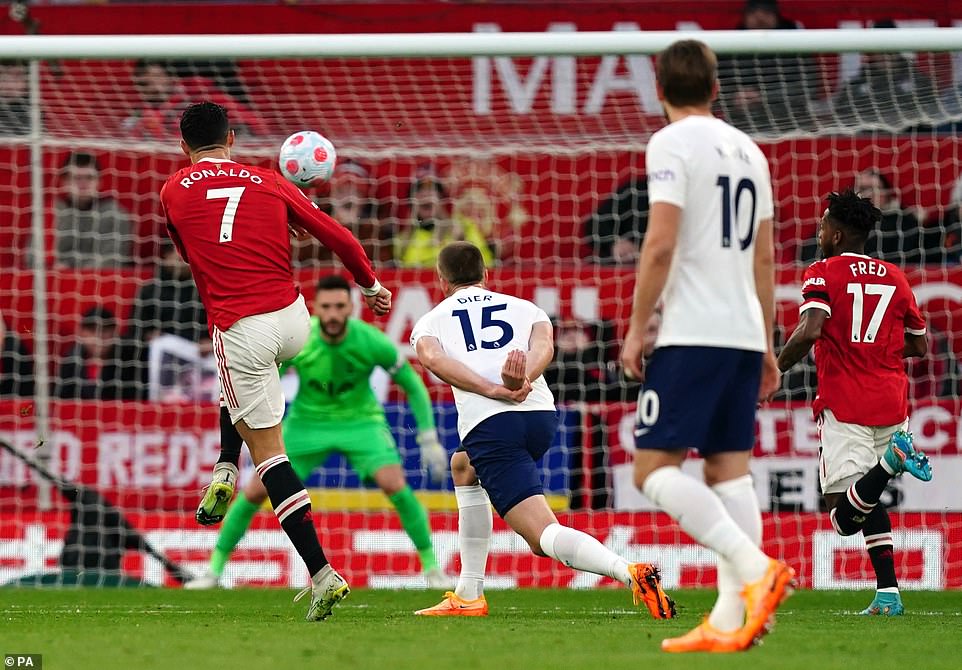 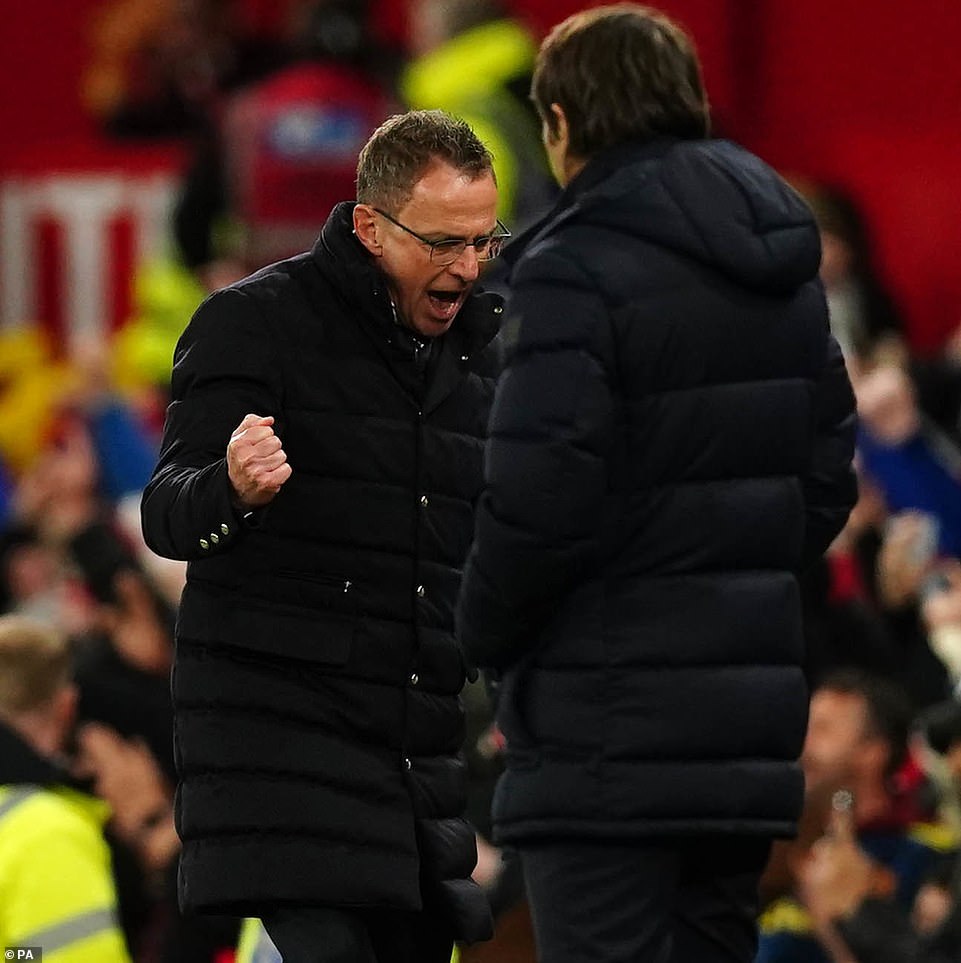 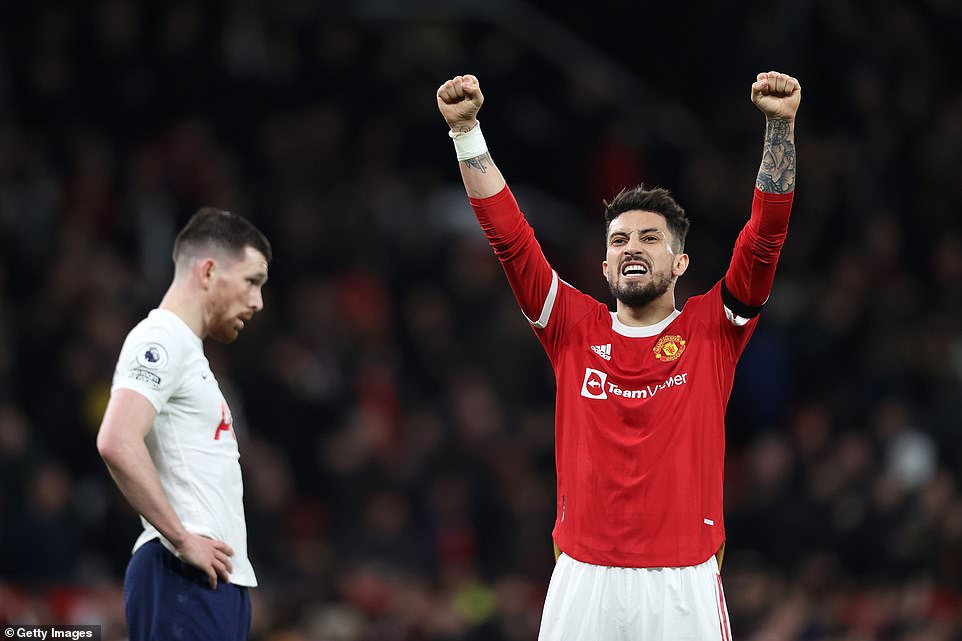 And you might question whether either club is deserving of playing in next season’s Champions League. But that would be to rain on the Ronaldo parade and who knows how many more of those there will be? Not that many more for a 37 year old undoubtedly, so everyone present was determined to enjoy it as much as they could.

‘It’s a challenge with a player like Ronaldo,’ he said and you sensed how much anguish was supressed within that bald statement. ‘He made the difference today, for sure. But not only with the three goals. That was best performance, at least since I arrived, on and off the ball. Today he showed for sure that he has the physical capability to do that. And we have to admit that he hasn’t always been like that in the past few weeks.’

Only Antonio Conte was permitted to be churlish, chastising his team’s lack of game management, having twice got themselves back on the front foot and twice conceded the initiative with minutes.

But naturally he was gracious enough to acknowledge what was obvious to all. ‘Cristiano and Messi are the two best players in the world in this era. Before it was Maradona and Pele. But in this era it is Messi and Ronaldo.’

But really United were back to being what they were under Ole Gunnar Solskjaer at his best: delightful in moments but wholly unconvincing in the main. The hip injury, which had coincidentally worsened when Ronaldo heard that he wouldn’t be required in the starting line-up for last weekend’s derby game, had quickly healed after the trip to Portugal.

His opener was one of those moments to cherish. Fred, outstanding throughout, laid the ball off and Ronaldo found himself in space. Eric Dier hesitated, which was an open invitation for Ronaldo to shoot. It wasn’t quite the knuckleball free kick, where he gets his laces right under the ball, but it wasn’t far off, swerving and dipping with ferocious power so that even 25 yards out, it was never going to be saved by Hugo Lloris.

Yet United playing 4-2-4, with Pogba effectively Ronaldo’s partner – Ralf Rangnick seemingly has given up on expecting defensive duties from his most talented midfielder – always seemed bold against Antonio Conte’s wing back, which creates a four-man midfield. So it proved. 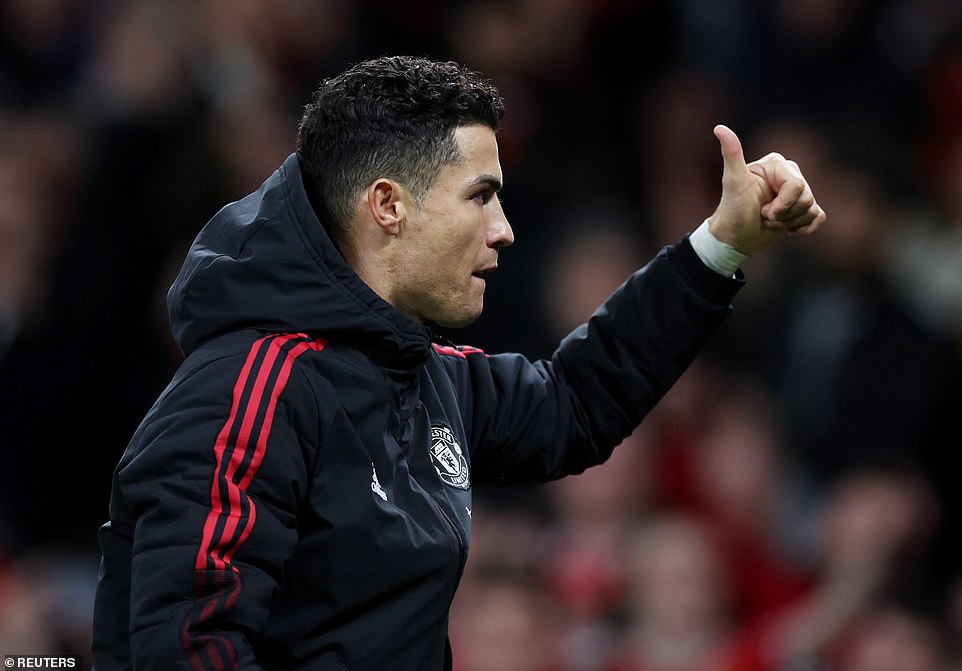 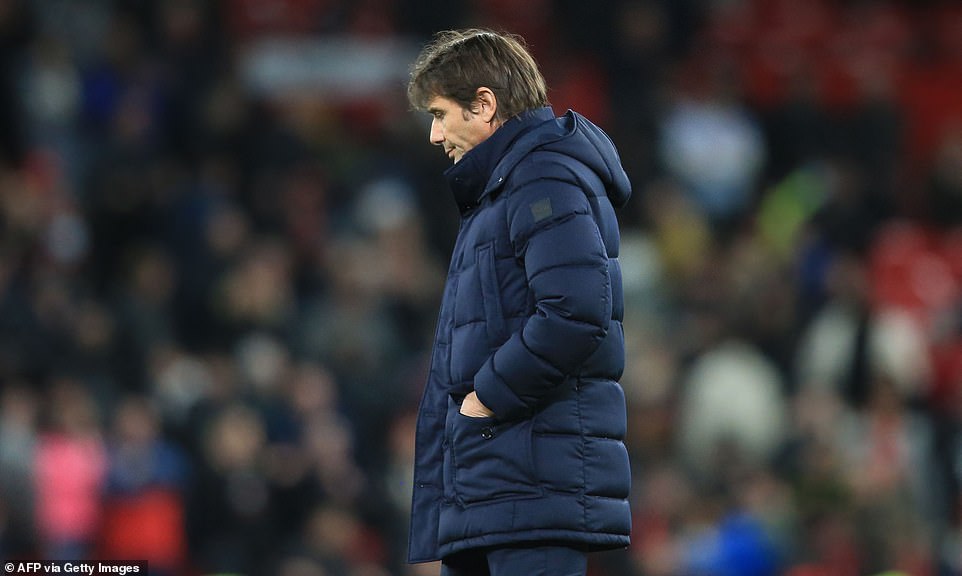 Initially, it was Sergio Reguilon and Heung-Min Son causing chaos down the left that troubled United. And Dier had a header cleared off the line by Diogo Dalot. Eventually, it was the right side that proved United’s undoing, Tottenham winger Dejan Kulusevski running through a lame challenge from Jadon Sancho and driving on into the box, his cross rebounding off the out-stretched hand of Alex Telles.

Protest mightily though he did, it was always a penalty. Harry Kane stepped up and hit the strike with such ferocity into the bottom left hand corner that even a decent dive from David De Gea couldn’t stop it.

Tottenham though have issues of their own in that they appear not be able to hold an offside line. Just three minutes later Nemanja Matic dinked a ball in for Sancho to run on to. Reguilon helpfully remained a step behind his team-mates, playing everyone onside and Sancho simply had to square for Ronaldo to restore United’s lead.

You suspected that wouldn’t last and indeed when Kulusevski pulled the ball back for Son on 61 minutes, the Korean should have equalised. They did on 72 minutes when Kane held the ball up, Son and Cristian Romero worked it through to Reguilon, whose drive into the box and cross panicked Harry Maguire to stick out a leg and divert it past his own keeper.

Poor Maguire is having a wretched season. In fairness, he though he needed to intervene because Romero was behind him. He wasn’t to know the Argentine defender was offside.

That said, a winner beckoned for someone. Neither side screamed defensive solidity. And Ronaldo was repeatedly testing Lloris from range. But the decisive goal came from Telles’ corner where Tottenham took the novel approach of declining to mark one of the world’s great players and allowing him a free header.

He met if perfectly, flexing his neck muscles and thrusting his forehead at the ball to head it past Lloris. In the corner, as he performed his trademark celebration, Maguire was one of the first on the scene, relieved to worship thankfully at the throne of CR7. It was almost like everything was well with the world and the dressing room was united. Almost. 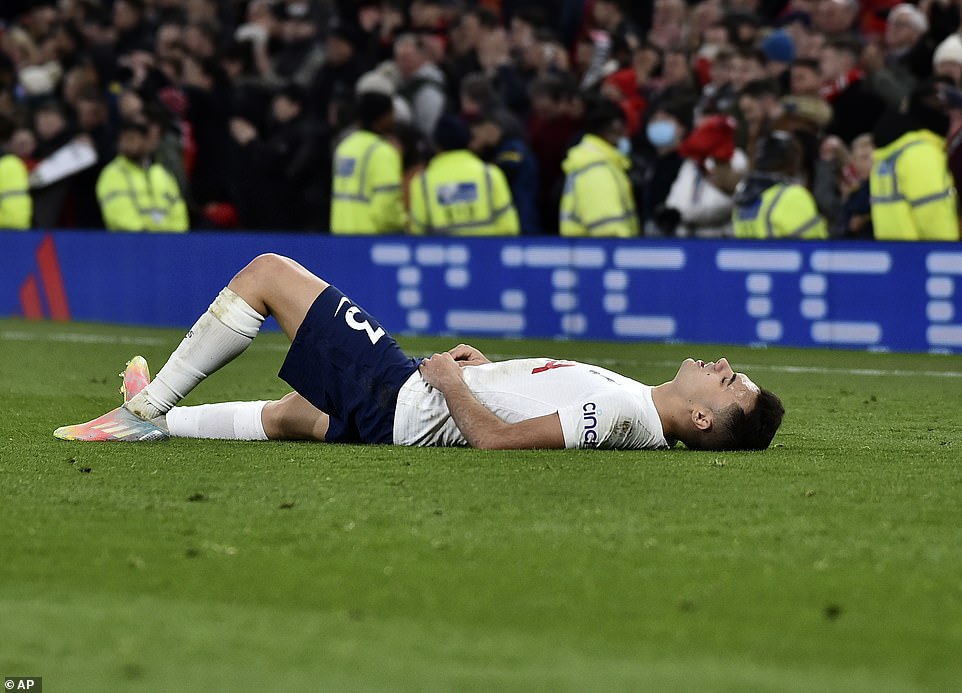 Charles Igbinidu is a Public Relations practitioner in Lagos, Nigeria
@https://twitter.com/ionigeria
Previous Chelsea sale back on after Roman Abramovich and government find agreement
Next Pogba will leave Man Utd at end of season, says personal trainer