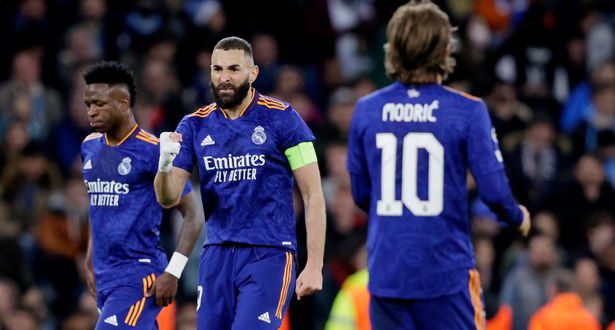 It took Manchester City just one minute and 34 seconds to open the scoring with Riyad Mahrez’s jinking inside run and pitch perfect delivery found Kevin de Bruyne, ghosting in unmarked, to head home past Thibaut Courtois. Nine minutes later, de Bruyne turned provider for Gabriel Jesus to double City’s lead with the visitors in danger of losing control of the game entirely.

Madrid eventually settled down after their nightmare start and Karim Benzema superbly turned home Ferland Mendy’s cross in the 33 rd minute to halve the deficit but City restored their two-goal lead after the break as Phil Foden nodded home from Fernandinho’s dinked delivery.https://get-latest.convrse.media/?url=https%3A%2F%2Fwww.mirror.co.uk%2Fsport%2Ffootball%2Fnews%2Fman-city-real-madrid-result-26806955&cre=top&cip=4&view=web

Within two minutes, Vinicius Junior’s decisive break ripped through Fernandinho – a temporary right-back, subbed on to replace the injured John Stones – and netted to once again reduce the gap, but Bernardo Silva’s stunning left-footed piledriver made it 4-2 with 16 minutes remaining.

Benzema grabbed his second of the evening eight minutes later with an audacious Panenka penalty after Aymeric Laporte’s handball inside the area. Here are five talking points from an exhilarating evening at the Etihad.

Kevin de Bruyne opened the scoring early – Man City have made a habit of this in recent games ( Image: David S. Bustamante/Soccrates/Getty Images)

De Bruyne opened the scoring after just 94 seconds of this enthralling tie – the fastest ever goal in a semi-final of the Champions League. It also continued City’s remarkable recent run of scoring within the opening five minutes of a game – they have done that four times in their past eight games, including against Burnley, Liverpool and Watford.https://imasdk.googleapis.com/js/core/bridge3.512.0_debug_en.html#goog_2125045030Big Match Focus – Liverpool v Villarreal – This video will start in0:01

The 2-2 draw against Liverpool earlier this month was the first time that City had dropped points after taking the lead this season – so it is a very obvious tactic from Pep Guardiola that he believes his side’s are at their best when they have the advantage.

After his hat-tricks against Paris Saint-Germain and Chelsea, there is little doubt that Karim Benzema had already established himself as the player of this season’s Champions League. His first goal against City was his 13 th in the Champions League this campaign, and his 40 th of the season across all competitions – in just 41 games.

Benzema is now the oldest player scorer 40 goals in one campaign for a club in Europe’s top for leagues since Ferenc Puskas, comfortably surpassing his previous season best tally of 32. It is not only the quantity of his goals, but the quality – this strike measured an xG (expected goal) of just 0.035, while it meant he has scored eight goals from 2.95 xG across his last four games against PSG, Chelsea and City. His Panenka penalty in the 82 nd minute was another moment of genius from the Frenchman, to bring his tally for the season to 41.

Gabriel Jesus went over three months without a Premier League start despite being fit and available for selection but is now once again a key player for Pep Guardiola. The only recognised senior striker in the squad, Jesus scored upon his return to the line-up against Liverpool in the Premier League and bagged four against Watford on Saturday.

The Brazilian was on the scoresheet again here as he doubled City’s lead within the opening 10 minutes – once again justifying Guardiola’s approach with the striker, who is already playing a key role in City’s run-in.

Without Kyle Walker and Joao Cancelo available, there was much talk about who Guardiola would play at right-back. John Stones started the game in that position but a first-half injury forced him off, to be replaced by Fernandinho.