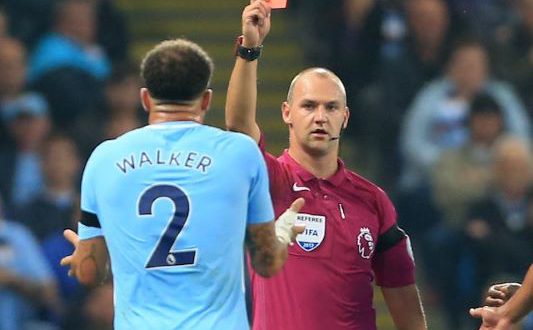 Spread the love
Kyle Walker has received a three match ban from UEFA competitions following his red card in Manchester City’s Champions League tie with RB Leipzig.
The England defender was sent off near the end of City’s 2-1 defeat in December.
Walker was given his marching orders for a challenge on Leipzig forward Andre Silva, with UEFA’s control, ethics and disciplinary body referring to the incident as an “assault”.
A red card would usually see a player banned for a single game, UEFA have increased the level of the suspension due to the severity of the incident, after Walker aimed a wild kick at Silva without attempting to play the ball.
Speaking about it recently, Walker said “My red card against Leipzig was a very bad judgement, a stupid error that a 31-year-old shouldn’t be making with the amount of games that I’ve played”.
Manchester City do not plan to appeal against the decision.
Walker said he vows to learn from the incident, saying, “I’m human, I make mistakes, I’m learning from that, and I’m going to bounce back”.
It means he will miss City’s round of 16 tie against Sporting Lisbon, with the first leg taking place on February 15th.
Pep Guardiola’s side are aiming to go one step further in the competition this season, after being beaten by Chelsea in last year’s final
Share

Charles Igbinidu is a Public Relations practitioner in Lagos, Nigeria
@https://twitter.com/ionigeria
Previous Unrest at Chelsea: Several stars not pleased with Tuchel
Next Barcelona and Juventus make offers to sign Aubameyang on loan, with Arsenal wanting to offload the misfit striker before the January window closes