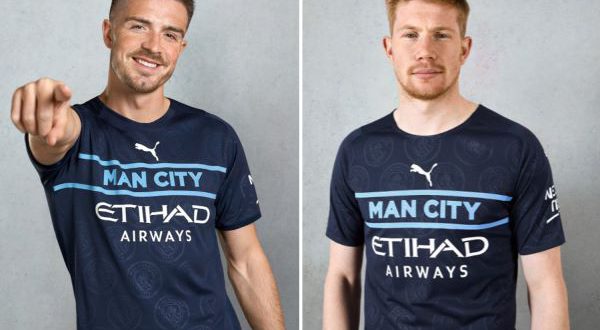 Manchester City fans tag their club’s new third kit as the ‘worst ever’, say it’s more like a training kit

Manchester City fans have slated their club’s new third kit as the ‘worst ever’.

The Premier League champions have DITCHED the traditional club badge.

Instead, the dark navy top simply bears the words ‘Man City’ across the chest, with the badge subtle printed in the background.

Indeed, the top appears to resemble a training shirt instead of an actual game-day jersey.

And disgruntled City fans were quick to criticise the dramatic new move.

One person wrote: “Man City in collaboration with Primark release their third kit.”

Another said: “I can’t wait for this to be in the clearance bin for £4.99 at the end of the season so I can still not buy it. Appalling.”

One added: “This is genuinely the worst kit I have ever seen. Apologies to City, but it is what it is.”

However, City’s third kit still has some way to go to beat Chelsea’s infamous strip from last season.

And many compared to the home kit of London rivals Crystal Palace.

The shirt made its debut in the 3-3 draw at relegated West Brom, prompting others to add Chelsea not only looked like Palace but played like them too.

However, the jersey’s finest – or worst – hour was yet to come.

In December, almost 2,000 people voted it the WORST football kit in the world.