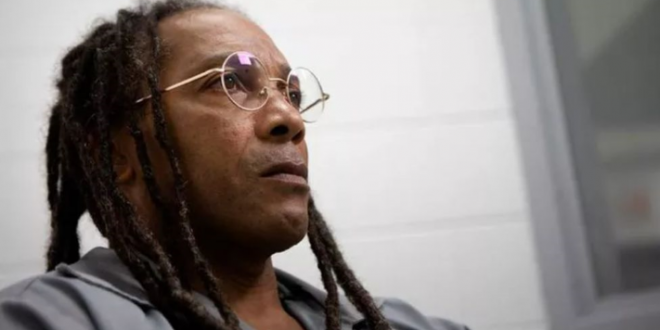 Kevin Strickland was sentenced in June 1979

A Missouri man wrongfully convicted of a triple murder in 1978 and imprisoned for more than 42 years has been exonerated and released.

Kevin Strickland, 62, has maintained his innocence since his arrest at age 18. He was sentenced in June 1979.

Mr. Strickland said outside court: “I didn’t think this day would come.”

It was the longest wrongful incarceration in state history, but under Missouri law, he is unlikely to receive any financial compensation.

According to data from the National Registry of Exonerations, which has logged exonerations since 1989, it would also be the seventh longest wrongful sentence acknowledged in the US.

A judge on Tuesday ordered the immediate release of Mr. Strickland from state custody, after 15,487 days behind bars.

Lawyers for the Midwest Innocence Project, who have worked for months to help free Mr. Strickland, told the BBC they were “ecstatic” about the news.

“We were confident any judge who saw the evidence would find Mr. Strickland is innocent and that is exactly what happened,” said Midwest Innocence Project legal director Tricia Rojo Bushnell in a statement.

She added: “Nothing will give him the 43 years he has lost and he returns home to a state that will not pay him a cent for the time it stole from him. That is not justice.”

The state of Missouri only compensates prisoners exonerated through DNA evidence, not because of eyewitness testimony, according to the Midwest Innocence Project.

Mr. Strickland was sentenced to life in prison without the possibility of parole for 50 years after he was linked to the deadly ransacking of a home in Kansas City on 25 April 1978.

A fourth victim – Cynthia Douglas, 20 – escaped with injuries after pretending to be dead. On a hunch from her sister’s boyfriend, police arrested the teenage Mr. Strickland and then reportedly pressured Ms. Douglas to pick him out of a line-up.

Mr. Strickland told police he had been at home watching television. No physical evidence ever linked him to the crimes.

His first trial in 1979 ended with a hung jury after one black juror on a 12-member panel held out for his acquittal.

At his second trial, an all-white jury found Mr. Strickland guilty of one count of capital murder and two counts of second-degree murder.

Years later, Ms. Douglas would recant her lone eyewitness testimony, writing to the Midwest Innocence Project that “things were not clear back then, but now I know more and would like to help this person if I can”.

Ms. Douglas died before she could formally recant her testimony against Mr. Strickland, but her mother, sister, and daughter have all testified in court that she picked “the wrong guy”.

“Under these unique circumstances, the Court’s confidence in Strickland’s conviction is so undermined that it cannot stand, and the judgment of conviction must be set aside,” wrote Judge James Welsh in Tuesday’s ruling.

Ms. Rojo Bushnell of the Midwest Innocence Project said the process has “shown how incredibly difficult it is for the system to correct a mistake. The prosecutor agreed Mr Strickland is innocent and it still took months. It should not be that hard.”