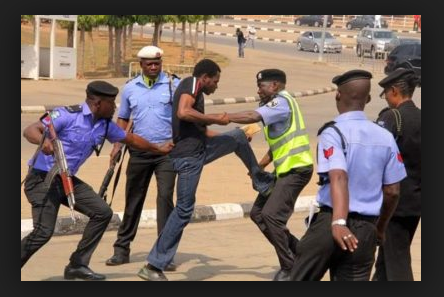 Four police officers attached to the Bar beach Police Division in Lagos are now hospitalised after they were brutally attacked and battered by a civilian, Afeez Olalekan while they went to perform their lawful duty.

When they got to the scene of the incident to invite Olalekan, he reportedly broke a bottle and inflicted injuries on the victims, disarmed them and stole the magazine before the officers managed to escape with their wounds. The civilian, Mr. Adebayo Jimoh who reportedly brought the officers was not spared by the suspect as he smashed his Toyota Camry with registration number, SMK 599 CE and damaged it.

However, the 36-year old Olalekan was later arrested and thereafter arraigned before Ikeja Magistrates court for the alleged offence.

The Presiding Magistrate, Mrs. O.A. Layinka granted Olalekan bail in the sum of N200, 000 with two sureties in like sum.

He was remanded in prison custody pending when he will perfect his bail condition. The matter was adjourned till 16 April, 2018.