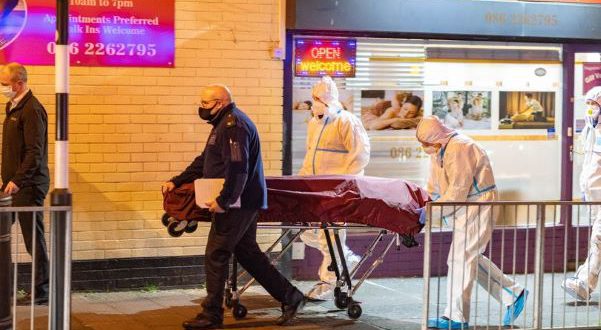 Gardai picture removing the body of a man left at a post office on Staplestown Road in Carlow. (Image: Dylan Vaughan)

A man who brought his dead uncle into a post office to collect his pension carried his coffin in an emotional funeral. He now claims he “didn’t know he was dead” at the time.

Declan Haughney, 40, insists that he was not trying to rob his deceased relative Peadar Doyle, 66, after he and another man dragged him for five minutes from his home to collect his pension from a Post Office in Hoseys, Ireland last Friday morning.

Declan, 40, told the Irish Mirror he’s now “the talk of the town” and has been branded a “murderer” in the local community ever since the sensational story emerged.

But he insisted he’s “not an eejit” – and believes he’s being accused of dragging his dead uncle into a post office to rob his pension – because he previously stole from his aunt.

He said: “Why would I want to rob my uncle? I’m 40 years of age yeah, I’m not a child, I’m not a young fella. I’m not an eejit to walk into Hoseys with a dead man and collect his money. Am I cuckoo? Am I cuckoo? I’m not.”

Declan claims he was assaulted after the incident last Friday, which made him the talk of the town

Declan, who admits he used to have a drug problem, and who served two years in prison, says he’s now being accused of knowingly bringing his dead uncle in to get his pension – because of his past.

He told us: “That’s why they’re saying it, that’s why this is all coming up now – because I done it before.

“A bank card came through the aunt’s door and I got the pin code and went down for fraud and that’s why this is all coming up.

“People know about that in the town you know. But that was 15 years ago. I’m off the gear three years and I’m doing well.”

Declan, 40, insists he wasn’t trying to rob his dead uncle when he took his corpse to a Post Office to collect his pension ( Image: Image By Mick O’Neill..)

And Declan, who has a black eye and facial injuries after allegedly being attacked following the incident last Friday, revealed that he now believes his uncle was dead before he even reached the post office.

Declan says he believes Peadar may have been dead by the time he and another male got him under the bridge at Pollerton Road, which is less than a two-minute walk from his home – but the pair continued to bring him to the post office by linking arms with him and dragging him there.

The body being removed from the post office last week ( Image: Dylan Vaughan)

When the pair propped Mr Doyle up against the counter a member of staff contacted the Irish gardai.

Both men, one of whom is said to have known Mr. Doyle ‘very well’, have since made full statements to the police investigating the incident from Friday.

Declan says he thinks his uncle died as they passed under the bridge on the way to the Post Office ( Image: Image By Mick O’Neill..)

Officers believe he may have died around three hours before his impromptu trip to Hosey’s newsagents and post office in Carlow with the men, despite the claims that he was alive.

Fr John Dunphy, the priest who delivered the last rites to Mt Doyle, said he received a call from police saying his remains had been left at the shop in ‘shocking circumstances.’

Charles Igbinidu is a Public Relations practitioner in Lagos, Nigeria
@https://twitter.com/ionigeria
Previous “That’s Arsenal for you, they never know how to forgive.”, Adebayor tells Aubameyang
Next United States puts 8,500 troops on higher alert over Russia-Ukraine tensions