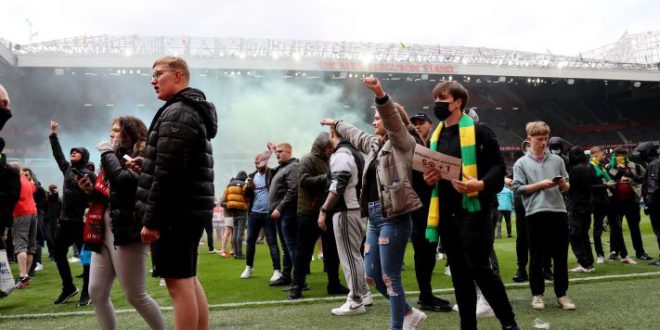 Hundreds of fans stormed the Old Trafford pitch on Sunday

MANCHESTER UNITED fans are planning new protests against the Glazer family ahead of Saturday’s game against Norwich.

The Red Devils slumped to a third defeat in five matches when they were beaten at Everton at the weekend – to leave their top four hopes in tatters.

Their final chance of silverware this season vanished when they lost to Atletico Madrid in the last 16 of the Champions League last month.

Now a United supporter group called ‘The 1958’ are rallying fans to make their feelings heard this weekend.

Following a march, they plan to stand outside the stadium for the first 17 minutes of the clash with the Canaries – to mark the number of years the Glazers have owned the club.

In April and May last year, protests were staged over United’s involvement in the ill-fated European Super League fiasco.

The Prem fixture against bitter rivals Liverpool had to be postponed due to the chaos caused inside and outside Old Trafford.

The statement reads: “This isn’t another Liverpool; we believe this was a one-off unique event.

“This is the start of the constant, relentless, peaceful and legal protests and actions against our owners.

“We know the challenges ahead of us and we will not waver or detract from these goals.”

“Nothing will change until the head of the snake is removed. It’s rotten and starts from the top down like any other business.

“The club is a mess so we need to act and raise awareness again.

“Bring your colours, banners, flags and flares. We need you; we need each other, we need everyone to put aside their differences. Some things are worth fighting for…”