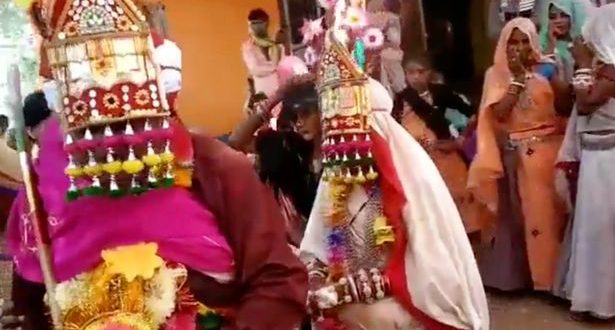 Charles Igbinidu May 3, 2022 Life and Style Leave a comment

The unusual wedding which involved a three-day tribal ceremony in Madhya Pradesh, India that finished on Sunday, saw the veiled groom dance with his three girlfriends to a chorus sung by guests and daring sword dances

A man has married his three girlfriends at the same time during a three-day tribal ceremony.

The unusual wedding, which took place on Sunday, saw the groom wearing a veil as he tied the knot with his three girlfriends in Madhya Pradesh, India.

Footage shows the fantastic foursome dancing together around a wooden pole while dozens of guests sing at the ceremony.

The man was also clasping a sword as his six children looked on.

He is reported to have been in a 15-year relationship with all three women.

Although polygamy is illegal in India, it is often practiced in tribal tradition in a bid to get social acceptance.

Polygamy is illegal in India but is practiced in some tribal communities ( Image: Jam Press Vid/Newslions)

Polygamy is legal in some parts of the world, like the Democratic Republic of the Congo where a man recently tied the knot with triplets who proposed to him simultaneously.

The man, identified only as Luwizo, had a dazzling wedding in the Democratic Republic of Congo, where people are legally free to marry more than one person.

His three new wives triplets Natasha, Natalie and Nadege couldn’t look happier during their big day in Kalehe, near the border with Rwanda.

Luwizo said he couldn’t say no when they all popped the question. He dutifully said yes when they all proposed, explaining that he felt that he was “obliged to because they are triplets”.

The big day took place in Kalehe, which is a territory located in South Kivu, in the eastern part of the Democratic Republic of Congo, near the border with Rwanda.

But his parents are still not on board – and refused to attend.https://get-latest.convrse.media/?url=https%3A%2F%2Fwww.mirror.co.uk%2Fnews%2Fworld-news%2Fman-marries-three-girlfriends-bizarre-26862219&cre=center&cip=17&view=web

Luwizo said that he first fell in love with Natalie before meeting her two other sisters.

He exchanged vows with the three women in a private ceremony attended by close friends and family, though his parents didn’t attend the wedding.

He said: “I was obliged to marry all of them because they are triplets. It wasn’t an easy decision because until now, my parents don’t understand what I’m doing.

“You have to lose something in order to gain another. In addition, one has their preferences and their own way of doing things.

“So I’m happy to marry the triplets no matter what others think. My parents despised my decision that’s why they didn’t attend my wedding. But all I can say is love has no limits.”

One of the three said she and her sisters had shared everything since they were children and so sharing a husband was not a hard choice for them.

Charles Igbinidu is a Public Relations practitioner in Lagos, Nigeria
@https://twitter.com/ionigeria
Previous Chelsea sale thrown into doubt as Roman Abramovich demands £1.6bn loan be ‘repaid’
Next Bill Gates Would ‘Marry Melinda All Over Again’ Despite Divorce: I ‘Highly Recommend Marriage’