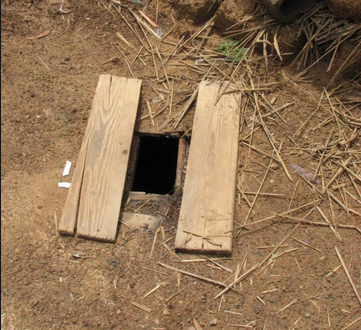 A 29-year-old man on Tuesday confessed to murdering his wife before burying the body in a disused toilet pit at his house.

Lenon Mangwiro reportedly wrapped the woman’s body in a blanket and placed it in a toilet pit before stashing layers of maize cobs on top.

The body was discovered a month later by neighbours who alerted the police, who then arrested him.

When he appeared before a Zimbabwean Magistrate Court, Mangwiro was advised to apply for bail at the High Court because he faces a Third Schedule Offence.

According to state papers, Mangwiro’s wife was reported missing to the police on May 22 last year by her mother Letwin Chinyan’anya.

The court heard that Rosemary Chakurira’s body was discovered in a shallow, disused toilet pit within Mangwiro’s compound.

It was alleged that the recovered body was wrapped in a blanket and tied with wire on the neck, legs and waist.

Efforts were made to locate Mangwiro, but he was nowhere to be found until he was arrested on March 4 in Norton.

When police interviewed Mangwiro, he reportedly confessed to hitting Chakurira with a log that had nails, twice on the head, the court heard.

He told investigators that there had been a dispute over extra-marital affairs between him and his now deceased wife.

A post-mortem carried out at Parirenyatwa Group of Hospitals concluded that death was caused by vital trauma and skull fracture consistent with a heavy sharp object being used.

The state has lined up seven witnesses who will testify.