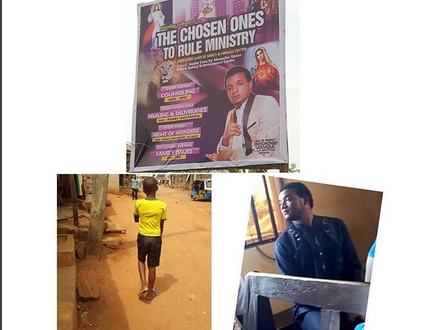 A pastor identified as  Dr. Prophet Chinonso Udemezue of the Chosen One To Rule Ministry, has been arrested for allegedly defiling a 10-year-old boy, Oluchukwu, in Asaba, Delta State.
According to rights activist, Gwamnishu Harrison, Udemezue had on the 5th February, 2018, prophesied that Oluchukwu will be kidnapped. Out of fear, the boy’s guardian then hurriedly took him to the prophet’s house for prayers and safe keeping.

Recounting what happened afterwards, the victim said: “It was the first time he’s doing it to me. At night he gave me his phone and played a film of people naked. He removed my clothes and rubbed something like oil and inserted his penis into my anus.”

According to Harrison, who has taken up the case, the prophet’s lawyer, church members (all females) are currently begging for settlement. The boy’s aunt also wants to collect money but she has been advised against it.

Previous 7 Months After Changing To Woman, Father Becomes Man Again
Next I’ll Take Nigeria To The Next Level – Buhari