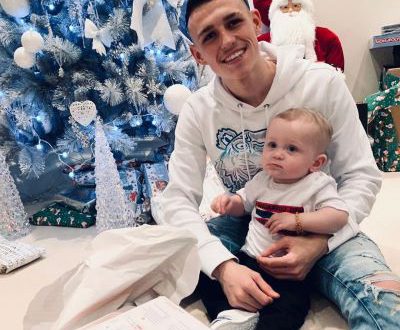 All eyes will be on Phil Foden as a potential England star after an incredible campaign for Manchester City.

The outrageously talented midfielder could be set for a starting berth in Gareth Southgate’s first eleven in the Euro 2021 opener, and he has done a lot of growing up since he made his City debut aged just 17.

Foden, now 21, became a dad a year after he made his bow for his boyhood club.

The wonderkid welcomed a son, Ronnie, with long-term girlfriend Rebecca Cooke, and he dedicated his MOTM display in the Carabao Cup final in 2020.

There was only one snag to him becoming a dad so young… Foden had to sacrifice his love of fishing, for now.

In January 2019, the birth of his first child changed Foden’s life.

He had already been dating Wag Rebecca for some time but they kept their romance under wraps.

Foden – who made his England debut in the 1-0 win over Iceland in 2020 – admitted he shed a tear when his son arrived.

“I was there for the birth,” he told Manchester City’s official website.

“I walked out of the room, gave it a little tear, and then went back in like nothing happened.

“I’m not one for crying in front of people. I like to be on my own, but I was there in the room, watched it happen and it was a special moment.”

And fatherhood certainly must agree with him, because back in April Foden revealed he and Rebecca are expecting their second child together.

His teammates told Foden that it would be the best thing that ever happened to him, but being a dad wasn’t going to be easy.

But, if he has a bad game or training session, having Ronnie at home does make things better and puts things into perspective.

Away matches, however, mean he doesn’t get to spend as much time with his son as he would like.

Foden revealed: “If you have a bad game or a bad session, you’re disappointed, but now I think about the bigger picture.

“I go home and see him smiling, so there’s more important things than worrying about one bad session.

“You look at things in a different way when you’ve got a kid.

“Honestly, I’m really enjoying it, but I find it quite difficult, always having away games and being away from him. He’s one now, so he’s missing me a bit.

“There are things you miss when you’re not there because you’ve got an away game.

“Now he’s getting about and walking everywhere, so you have to have eyes in the back of your head or he starts running off.

“It’s unfortunate to miss things like that but it’s a sacrifice that he’ll appreciate when he’s older.”

HOME IS WHERE THE HEART IS

Foden was raised by dad Phil and mum Claire in Edgeley, a modest Stockport suburb – far removed from the affluent towns and villages of Cheshire, nicknamed the Golden Triangle, where his team-mates now live.

But as soon as Foden had established himself in Pep Guardiola’s squad, he set out to repay his parents for helping him achieve his dreams of becoming a footballer.

The starlet spent £2m on a luxury home in Bramhall, near Stockport, where the family all live together.

Often, he’s seen walking around the neighbourhood with Rebecca, pushing Ronnie in a pram, while dribbling a ball at his feet on the streets.

Like any Premier League footballer, he loves gaming and has always preferred nights in playing FIFA over clubbing at one of Manchester’s famous nightspots.

FAST CARS? NO, HE LOVES FISHING

Modest for a man expected to be England’s next big thing, ‘Pep’s Lad’ also christened the ‘Stockport Iniesta’ by City fans has an unexpected hobby.

Although he’s had to put his love of fishing on the back-burner, with his time dedicated to Ronnie, he loves nothing more than catching carp with his pals.

Foden would even trek to Spain, where he once hooked a 130lb catfish.

“I was probably about six or seven and my dad had a fishing rod of his dad’s and said we should go and try it out,” he recalled.

“I fell in love with it and we ended up going every weekend. I still remember my first catch.

“It wasn’t very big, I was just learning, but it’s the excitement of when you get one for the first time.

“I think that’s the buzz that makes you want to go again, but it’s also a chance to chill and relax and to spend time with my dad.

“I think it’s really good after games when you have to rest your legs and I just find it really enjoyable.