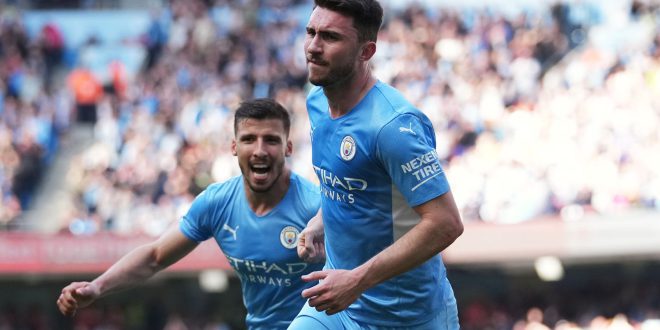 Manchester City moved three points clear at the top of the Premier League table with a convincing 5-0 thrashing of Newcastle at the Etihad Stadium.

First-half goals from Raheem Sterling and Aymeric Laporte ensured Pep Guardiola’s side settled any pre-match nerves relatively early to take advantage of Liverpool’s slip up against Tottenham as they shrugged off their midweek Champions League setback in style.

Rodri added the third goal on the hour mark from Kevin De Bruyne’s corner before substitute Phil Foden and Sterling with his second of the game underlined their dominance as City produced an emphatic second-half performance in the Manchester sunshine.

The dramatic defeat to Real Madrid provided an intriguing backdrop to the game and Newcastle did have chances early on – the best falling to Chris Wood.

But City created chances throughout and they now have some margin for error, knowing that two wins and a draw from their remaining games will be enough to retain the title.

Newcastle, with Callum Wilson and Kieran Trippier both making their return from injury off the bench, missed the chance to move into the top half of the table and remain in 13th position.

How Man City won the game

On reflection, Wood’s headed chance after eight minutes was a key moment in the game. With Joelinton free behind him, the striker could only nod the ball softly to Ederson. It was a bad miss.

Cancelo did rather better for Sterling’s goal, finding the forward from Ilkay Gundogan’s raking pass on the diagonal, with the England man doing the rest from close in.

Newcastle did almost have an equaliser immediately through Wood but Bruno Guimaraes had been offside when making contact with Jamaal Lascelles’ initial header from the corner.

But when Martin Dubravka failed to grasp Gundogan’s fierce shot from distance, being beaten to the rebound by Ruben Dias before Laporte forced home, the result felt inevitable.

City had, of course, surrendered a two-goal lead to Real Madrid, but there was to be no repeat, Rodri nodding in at the near post to make it three on the hour as Newcastle retreated at the start of the second half.

The best Newcastle chance fell to the rusty Wilson as Ederson saved well with the striker clean through, but it was Foden who had his say, sweeping in Zinchenko’s cross-shot after good work by Jack Grealish.

And the last word went to Sterling, latching onto Grealish’s pass to make it five in stoppage time.

The loss of Dias to injury at half-time was the only disappointment for the home side. Fortunately for City, despite Guardiola’s insistence before kick-off that they still need to win all of their games to claim the title, the reality is that they now have wiggle room in this race.