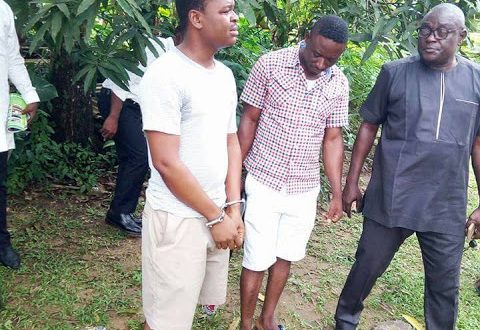 A young man was arrested and put in handcuffs after he was apprehended while stealing meat from the kitchen of the Parish Priest of St. Paul Catholic Church, Rev. Father Francis Effiong at the University of Calabar (UNICAL).

According to a report, the suspect entered the Priest’s kitchen this morning when the clergy had left to church for 9’o’clock mass and found his way into the kitchen to steal meat in the fridge.

The man, who claims to be a prison warden and lives in the boys’ quarters just directly behind the priest’s kitchen -thought no one was in the house here at the staff quarters. He ran out of luck as he was apprehended just when he was leaving the kitchen with bags of meat in both hands”.

According to the report, before today’s incident, many other items such as washing machines, television sets, cookers, and so on have been missing from the house.