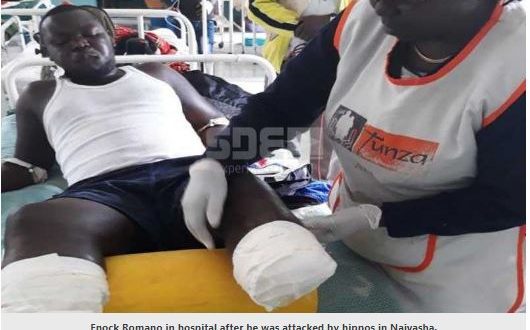 There is rising cases of human-wildlife conflicts in Naivasha,Kenya where wild animals have been straying out of their natural habitats in search of pasture and water.

Doctors have amputated the legs of a man who was attacked by a hippo in Lake Naivasha at the weekend.

The doctors said cutting off both legs under the knees was the only way to save the life of the father of two.

The amputation came amid concerns over rising cases of human-wildlife conflicts in the town.

Naivasha is home to two major national parks and several animal sanctuaries. Wild animals have been straying out of their natural habitats in search of pasture and water, especially following the prolonged drought.

In the latest case, three men were attacked by a herd of hippos in Kasarani and Oserian. One died and the others were seriously injured.

Susan Kamau, a nurse at the Naivasha Sub-County Hospital, said the two were brought to the hospital in serious condition. She said the legs of one of the victims were completely crushed.

“It was impossible to treat them. The victim had to be rushed to theatre as his legs were literally hanging from the skin. They had to be amputated as we did not have any other option.”

She said the man would get artificial legs after recovery.

“The second victim had deep injuries in the thighs. He is in stable condition and will be discharged soon,” she added.