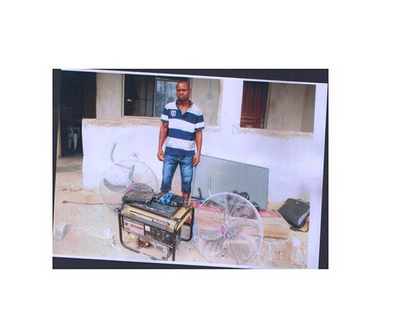 25-year-old Thompson Otobo, who allegedly burgled a Mountain of Fire and Miracle (MFM) Ministries and carted away appliances worth N440,000, was on Wednesday brought before an Igbosere Magistrates’ Court in Lagos.

The court heard that the parish reported the theft at Area J Police Command, Elemoro, Ibeju-Lekki, following which investigation began. The defendant was arrested at a market in Ajah, while trying to sell some of the stolen items.

He confessed during interrogation that he stole the items so he could sell them and use the proceeds to start his life. Magistrate Layeni granted him bail in the sum of N100,000 with two sureties in like sum and ordered him to be remanded in Ikoyi Prison till he fulfills the bail conditions.