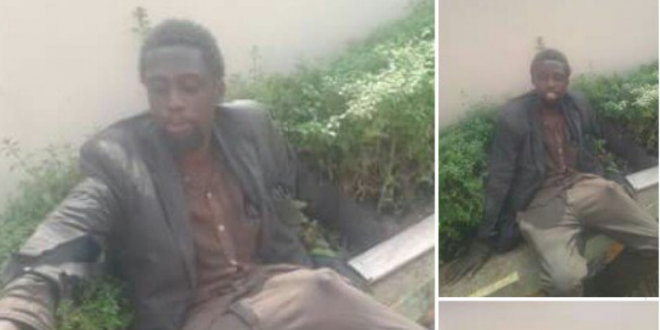 Eric Okojie on Wednesday,  narrated the pathetic story of Onwughara Daniel Emeka, his former school mate at the Delta State University, Abraka, who is now mentally disabled and living on the street.

Few days ago, Okojie was walking down a street in Benin City when he heard someone shout out his name. He was shocked to see a well-spoken, emaciated man in rags. He didn’t recognise him. Read the rest below:

About a week ago, I was walking down a popular road  in Benin city while on phone with a friend.
As I was about to  cross a T-junction, suddenly while still on the phone I heard the man (in rags) whose pictures you are seeing speaking the best of English grammar, but not minding him nor listening to what he was saying, I walked past him.
Immediately he paused, and I heard a strange voice calling me by name.
Shocked I quickly hanged up the phone.

Don’t you know me? He asked! I didn’t say a word. Looking at him, still wondering how he got to know my name!
Are you not a Nifesian? He questioned.
He then went on to remind me what happened about ten years ago, how I helped him as a fresher in Delsu Asaba campus, how I accommodated him  when he had issues in hostel 9.
He told me his name is Emeka. At this point I was confused so I hurried away.

But as I walked away, I was troubled within me especially because even though he looked insane but his ability to accurately remember events that transpired 10 years ago was baffling.
Convinced in my spirit to probe further, I went back.

I called him EMEKA and with excitement he said, “you Don remember me now abi?”
Then I interrupted him.

I asked him who else he knew in Delsu apart from me. Adebola Bakare  he replied.

The following discussion ensued
Me: Who was you best friend in School
Emeka: Stanley ochuko

Me: which course did you study?
Emeka: business administration

Me: which year did you gain admission? Emeka: 2007

Me: where you a regular student? Emeka: no it was CEP he replied.

At this moment I was like how come you remember  so much? Emeka: I can remember everything that happened.

Me: Okay, give me any of your family member’s phone number.
Emeka: I can’t remember any

Me: if you can remember what happened 10 years ago, you should be able to remember a number.
Emeka: if I remember I for tell you.

Me: Where do your parents recides? Emeka: DSC.

Me: which church do your parents attend? Emeka: deeper life bible church.

Me: which branch. Emeka: DSC branch.

Me: what about your siblings?
Emeka: I don’t know where they are.

I discovered that He is from Isialangwa, Ugwa in Abia state. His mum’s name is Mrs. Unkasi popularly known as “nwanyi church” he added. And for over 30 minutes I was with him asking questions and receiving answers?

Before I finally left, he described his place where he sleeps along the road to me. I have passed by that place several times within the week and always see him sitting.

I have gathered that his name is Onwughara Daniel and that he started having certain mental issues back in school.

MY THOUGHTS
How can an insane Man remember things that happened over 10 years ago?
Maybe he just needs a good psychiatrist then he will gain back his senses.