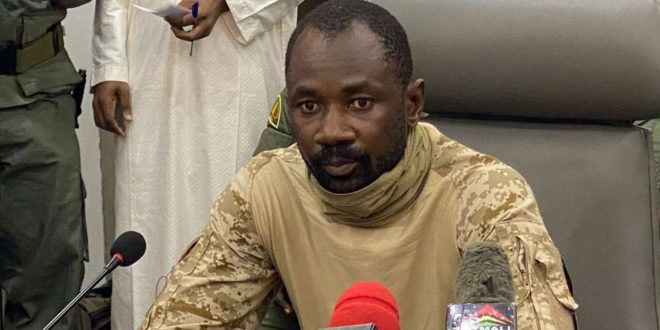 Colonel Assimi Goita speaks to the press at the Malian Ministry of Defence in Bamako, Mali, on August 19, 2020 after confirming his position as the president of the National Committee for the Salvation of the People (CNSP). Malik Konate | AFP

Mali’s interim President Assimi Goita has been targeted in an attempted stabbing attack during Eid al-Adha prayers, according to Al-Jazeera.

The outlet, using information from the president’s office, says the attack took place at the Grand Mosque in the capital, Bamako

“The attacker was immediately overpowered by security. Investigations are ongoing,” the presidency said in a Twitter post on Tuesday.

Goita was taken from the scene, according to an AFP news agency, who said it was not immediately clear whether he had been wounded.

An official at the presidency later told AFP that Goita was “safe and sound”.

The president arrived at the military camp of Kati, outside Bamako, “where security has been reinforced”, the official said.

Religious Affairs Minister Mamadou Kone told the news agency that a man had “tried to kill the president with a knife” but was apprehended.

Latus Toure, the director of the Great Mosque, said an attacker had lunged for the president but wounded someone else.

The president, 37, was sworn into office last month despite facing a diplomatic backlash over his second power grab in nine months.

In August 2020, Colonel Goita had led a military coup that removed embattled President Ibrahim Boubacar Keita after months of anti-government protests over perceived corruption and the failure to tackle a deteriorating security crisis that first emerged in 2012.

In late May, Goita, who was serving as Mali’s vice president in a transitional government tasked with leading the country back to civilian rule in February 2022, seized power again after accusing interim President Bah Ndaw and Prime Minister Moctar Ouane of failing to consult him about a cabinet reshuffle.