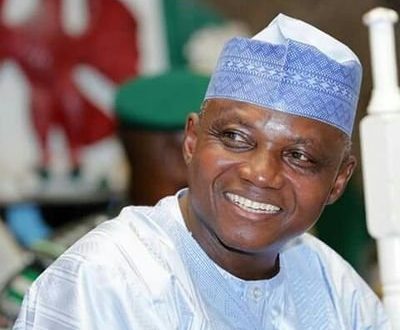 The Senior Special Assistant to the President on Media and Publicity, Garba Shehu, on Wednesday said Acting President Yemi Osinbajo’s statement on the confirmation of acting Chairman, Economic and Financial Crimes Commission, Mr. Ibrahim Magu, was a personal opinion.

Also on Wednesday, the Attorney General of the Federation, Mr. Abubakar Malami (SAN), declared that the position of Osinbajo on Magu was not a decision of the Federal Executive Council.

Osinbajo had, in an interview in April, ruled out the possibility of President Muhammadu Buhari replacing Magu, whose nomination was rejected by the Senate twice.

He had said he aligned himself with the argument of a Senior Advocate of Nigeria, Mr. Femi Falana, that Senate confirmation was not needed for the EFCC chairman based on the provisions of Section 171 of the constitution.

Osinbajo’s statement has drawn the ire of Senators, who, on Tuesday, resolved to step down all requests for confirmation into executive positions from the Presidency.

The senators also asked the acting President to withdraw the statement “without further delay.”

Shehu explained that the statement was Osinbajo’s personal opinion, which he made as the Vice-President when Buhari, who is currently receiving medical treatment in the United Kingdom, was still in the country.

The presidential spokesmen stated this in an interview with journalists in Abuja.

He said, “Our understanding is that some remarks made by the Acting President some months ago when he was the Vice-President, because the President was around at that time, an opinion he gave is being misconstrued.

“A senior lawyer in the country offered an opinion, in which he said some categories of public officers, traditionally cleared by the National Assembly, need not go through that process, that those ones can be appointed through presidential fiat; they don’t have to go through screening.

“But several months ago, in his position as Vice-President, Prof. Osinbajo gave a personal opinion, saying what this lawyer said makes sense.”

Shehu added that the Federal Government had not taken a decision that some nominees would no longer be sent to the National Assembly for confirmation.

He said since Osinbajo gave the opinion, over 20 nominees had been sent to the Senate for confirmation.

Shehu however assured all stakeholders that the current face-off would be resolved through dialogue.

He said, “There is no official position by the government of Nigeria, and the Federal Executive Council never sat down to take a decision to say that some categories of officials will not be sent to the National Assembly any longer.

“The authority of the Senate, under the Constitution to screen and pass nominees, has never been questioned by the government or the Federal Executive Council.

“From the time the Vice-President gave that opinion till now, more than 20 nominations have been forwarded to the Senate and quite a number of them have been screened, sworn in and are now occupying positions.

“Therefore, this is not a big issue as some people want to make it. The party, government and the National Assembly will sit at a round table and this matter will be discussed and resolved.”

Also, Malami said since the council did not at any time take the decision, there was no need to make any clarification about Osinbajo’s statement.

The AGF said this while responding to questions from State House correspondents for council’s position on the face-off between the Senate and the Presidency after the weekly FEC meeting presided over by Osinbajo.

The justice minister added, “The fundamental consideration about the alleged statement is the fact that at no point ever did the Federal Executive Council sit down to arrive at the decision in one way or the other as far as the issue of nomination or otherwise is concerned.

“So, I do not think it constitutes an issue for the Federal Executive Council to make any clarification about because it has never been considered by the FEC.”

Malami said he would yield the floor to the Minister of Information and Culture, Alhaji Lai Mohammed, who addressed journalists with him, to speak more on the issue.

Mohammed, on his part, said there was an “excellent mechanism” in place to resolve whatever disagreement that might arise between the executive and the National Assembly.

The minister added, “Clearly, it (the issue) came up. The fact of the matter is that we have a very excellent mechanism for resolving whatever issue is between us and the National Assembly; that is being addressed.

“I don’t think we need to go to specific statements as to what was said by A or B. We believe that government is not one arm, but includes the legislative, executive and judiciary arms. Whatever might be the problem, we are resolving it and we are addressing it.”

Meanwhile, Malami also disclosed that the FEC approved the validation of a new anti-corruption strategy.

He said the new strategy was meant to review the country’s anti-graft war and put in place mechanisms for enforcement and sanctions of offenders.

The Minister of the Federal Capital Territory, Mohammed Bello, said the council also approved contracts worth N900m for the engineering and infrastructure design in different parts of the FCT.

According to him, approval was given for Ring Road B, which passes through Kubwa Express way, Airport Road, Southern Expressway and the Wasa District at a cost of N242m.

The contract for water treatment and connecting pipelines to the Abuja Water Master Plan was also approved at a cost of N233m.

Meanwhile, at the beginning of the weekly meeting, Osinbajo led council members to honour an elder statesman, Maitama Sule, who died on Monday in Egypt.

A minute silence was held in honour of the deceased who the Acting President said contributed to national development at all levels of his engagements.

Osinbajo said, “He (Sule) will be sadly missed by all of us who regarded him as a mentor and as a father of the nation and one of the great contributors to the growth and stability of the nation.

“The Federal Government was represented by a delegation, led by the Chief of Staff to the President, Abba Kyari, and several members of the Federal Executive Council.’’

When contacted on Wednesday, the Senior Special Assistant to the Acting President on Media and Publicity, Mr. Laolu Akande, said what Malami explained was that presidential nominations were not issues for FEC.

“The minister did not say that what the Acting President said was not a council decision.

“What he said was that presidential nominations are not issues for the council,” Akande said.